You are here: Home>Herts history>Topics>Crime>Rogues and Vagabonds .. and other criminals

Rogues and Vagabonds .. and other criminals 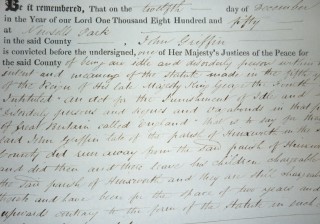 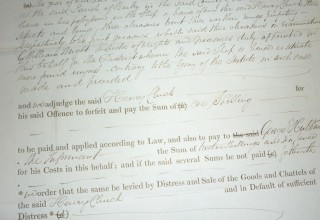 August 2015 saw the addition to Hertfordshire Names Online of more than 12,000 summary convictions taken from the returns of the Petty Sessions throughout the county.

The crimes recorded during the nineteenth century include assault, poaching, trespass, theft, and damage.  There were also a few who were convicted of  ….

“being an Idle and Disorderly Person within the Intent and Meaning of the Statute made in the Fifth year of the Reign of his late Majesty King George the Fourth, intituled, “An Act for the Punishment of Idle and Disorderly Persons, and Rogues and Vagabonds, in that Part of Great Britain called England.”  These were those who were convicted of begging, vagrancy, desertion of family and one or two prostitutes.

Poaching and trespass also had suitable legal language to describe the crime.

John Nunn “did on the 22 August 1850 at the parish of Barkway unlawfully use a certain instrument to wit a snare for the purpose of taking a Hare or Hares there he the said John Nunn not being authorised so to do for want of a Game Certificate contrary to the statute …” He was fined £1 and costs of 10/6 and, if not paid by 2 October, it was to be hard labour for a month at the House of Correction (the county gaol).  Edward Catlin was convicted of poaching at Hatfield in 1839 and given a sentence of 2 months  but a year later, Joseph Cook of Berkhamsted was convicted of the same offence and received a fine and costs.

A recent email from a family history organisation invited its recipients to discover their criminal ancestors! But would we now view some of these people as “criminals”?  James Briars of Baldock  was sentenced to 21 days hard labour in October 1848 for the theft of turnips valued at 6d.  In December of the same year, the widow, Rhoda Copes was given 14 days hard labour for the theft of turnips valued at 1d.  Christmas spirit was not in abundance in Barkway in 1853.  William Watson was convicted of stealing branches of holly on 22 December and ordered to pay sixpence in compensation, plus a fine of 5/6d.  (The victim of this crime was the Reverend Leveson Vernon Harcourt, a son of the Archbishop of York).

However, a crime which affected many and accounted for most mid-nineteenth century “criminals” at the Royston Petty Sessions was that of Weights and Measures, with some serial offenders.  Many, such as Jane Camp of Yardley, James Gatward of Therfield and Edmund Stanton of Hinxworth were regulars for having defective weights in their shops.  Clearly a fine, typically around 1 to 5 shillings, and costs of 10 shillings and sixpence were no deterrent.

A fine and costs was the punishment for most crimes with a prison sentence in default of payment but in 1849 William Howard was convicted of being drunk at Barley.  He was fined 5 shillings with nine shillings and sixpence costs and, if unable to pay, was to be committed to the public stocks of the parish of Barley for a period of 6 hours.

Not all the names on the records of the Petty Sessions are those of criminals.  There are the names of the magistrates, witnesses, family members and local officials, such as the Police Constable and the Overseer of the poor.  Costs were often awarded to the Overseer of the parish where the crime was committed.  In January 1840, for example, William Dove was convicted of trespass in Hertford.  An award was made to the stone mason, David Peck, who was Overseer of the St John’s parish in Hertford.  (He was also the father of Arthur Peck, see “The Diary of a Nineteenth Century Stonemason – Arthur Peck of Hertford“.)