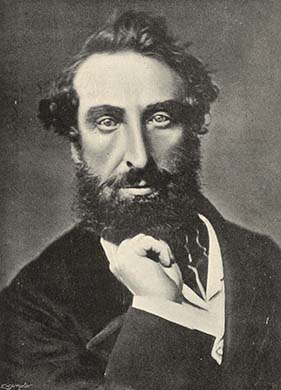 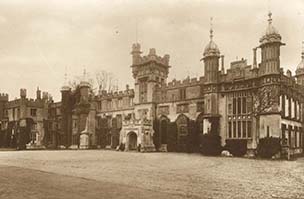 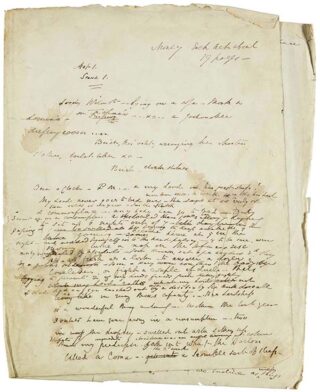 Bulwer Lytton's manuscripts for his play, Not So Bad as We Seem. The original cast included Charles Dickens as the hero, Lord Wilmot, and Wilkie Collins, author of The Moonstone and The Woman in White as 'Smart', Lord Wilmot's valet.
Hertfordshire Archives and Local Studies (DE/K/W23) 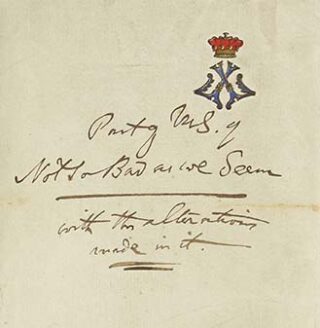 Edward Bulwer-Lytton (1803-1873) was a writer and politician, who built a significant literary reputation in his day with popular novels such as Pelham, The Last Days of Pompeii, and The Coming Race. He inherited Knebworth House from his mother in 1843 and was created Baron Lytton of Knebworth in 1866

Bulwer-Lytton served as a Member of Parliament, first for the Whigs, and then as Conservative MP for Hertfordshire. From 1858 to 1859, he was Secretary of State for The Colonies.

His first novel was published in 1827, and he continued to write prolifically throughout his life in a variety of genres, including historical novels, romances, mysteries and science fiction. While his books have fallen out of fashion, a number of Bulwer-Lytton’s phrases, such as “the pen is mightier than the sword” and “the great unwashed”  have entered the language, and the melodramatic opening to his novel Paul Clifford – “It was a dark and stormy night”  has been much parodied.

He had a close friendship with Charles Dickens for many years, based on mutual literary admiration, and his most lasting literary achievement may have been persuading Dickens to change the ending of Great Expectations in1861 to suggest that Pip and Estella end up together.

In 1850, following a visit of Dickens’ amateur theatre company to Knebworth, Lytton and Dickens founded the Guild of Literature and Art – a charity which put on performances to raise money for penniless writers and artists.  Bulwer-Lytton wrote a comedy – Not So Bad as We Seem – for Dickens’ company to perform. This was a huge success and was presented all over the country and in front of Queen Victoria and Prince Albert, who donated £150 to the cause.

Bulwer-Lytton died in Torquay aged 69, and is buried in Westminster Abbey.