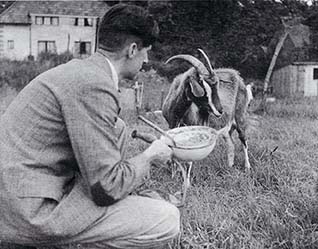 Orwell at Wallington with his goat, Muriel, named after one of his aunts
Hertfordshire Archives and Local Studies (Additional Topographical Survey) 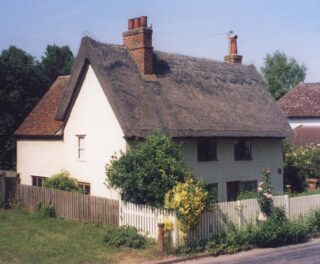 George Orwell's cottage as it is today with a thatched roof. Orwell grew roses in his garden from Woolworth's seed packets.
Hertfordshire Archives and Local Studies (DEX1024/1/152/125)

George Orwell (1903-1950), novelist, journalist and essayist, was one of the most influential writers of the 20th Century, best known for his novels Animal Farm and Nineteen Eighty-Four. The term ‘Orwellian’ has come to describe authoritarian political practices, and many of his phrases, such as ‘Big Brother’ and ‘Room 101’, have been adopted into everyday language.  Orwell lived in the village of Wallington in North Hertfordshire from 1936 to 1940.

Orwell, whose real name was Eric Blair, was born in India in 1903, but was educated at Eton College. He described the experiences of his early life in semi-autobiographical novels including Burmese Days and Keep the Aspidistra Flying, and non-fiction works such as Down and Out in Paris and London.

In April 1936, he moved into a tiny 17th Century cottage called ‘The Stores’ (a former village shop) in Wallington. The cottage was very simple, with no electricity, a toilet at the bottom of the garden, and a corrugated iron roof, which was unbearably noisy in the rain. To help pay the rent, he bought a bacon slicer and reopened the stores to sell basic provisions. He kept chickens and goats and grew vegetables in the garden.

In June 1936, he married Eileen O’Shaughnessy at St Mary’s Church, followed by lunch at The Plough, next door to the cottage.

Orwell wrote two of his most important works at Wallington – The Road to Wigan Pier, describing working class life, and Homage to Catalonia, recounting his experience in the Spanish Civil War. He is also thought to have modelled the farm in Animal Farm on a farm in the village.

The Orwells moved to London in 1940, but kept the cottage as a weekend retreat until Eileen’s death in 1945. Orwell died of tuberculosis at the age of 46.