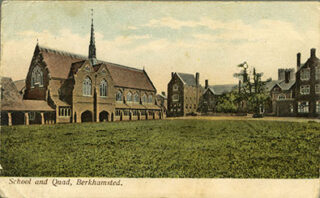 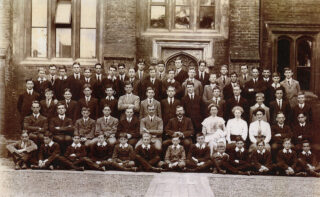 Graham Greene while a young pupil at Berkhamsted School in 1912, seated from row, fifth from right. His father, Charles is seated in the centre of the second row with wife Marion by his side. Marion is holding Greene's brother, Hugh, and next to her is his sister, Molly.
Reproduced by permission of Berkhamsted School, 2020

Graham Greene (1904 – 1991) was one of the outstanding novelists of the 20th Century, combining critical acclaim with widespread popularity in novels such as such as Brighton Rock and The Quiet American. He also wrote a number of successful screenplays, notably The Third Man in 1949.

Greene was born into a large and influential middle-class family in Berkhamsted, and although he lived abroad for much of his life, familiar landmarks and aspects of life in his home town appear in several of his works. He attended Berkhamsted School, where his father was headmaster, but had a traumatic experience – he was bullied and suffered severe depression, attempting suicide several times, including once by Russian roulette. At the age of 16, he was sent to London for six months for psychoanalysis.

After graduating from Oxford in 1925, he worked as a journalist. His first novel, The Man Within, published in 1929 enabled him to become a full-time writer, but his first big success was Stamboul Train in 1932. At first, he divided his books into ‘entertainments’ (fast-paced thrillers) and ‘novels’ (dealing with more serious moral themes), but this distinction broke down as his career progressed.

He served in MI6 during the Second World War, and travelled widely throughout his life, partly to satisfy his quest for adventure, and partly to gather background material for his writing. Novels such as The Heart of the Matter and Our Man in Havanna, set in ‘third world’ countries at times of political and social upheaval, reflect these experiences.