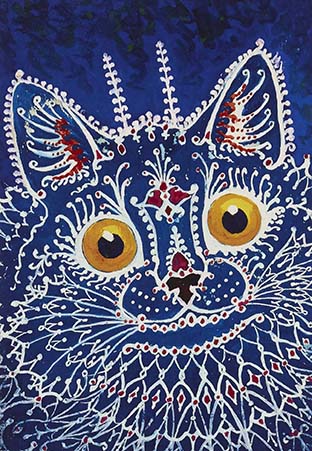 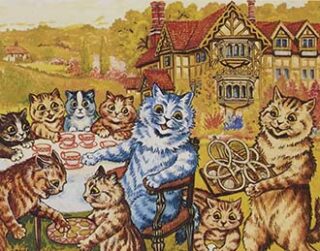 Louis Wain (1860 -1939) was an artist, best known for his drawings of human-like cats. He illustrated more than 200 books, contributed regularly to magazines, including Illustrated London News and Boys Own Paper, and his work was frequently used in adverts. In his later years, he suffered from mental illness and lived the last nine years of his life at Napsbury Asylum near St Albans, still drawing cats.

Wain was born in Clerkenwell. After attending Art School, he was employed as an illustrator on various publications. He married in 1883, but his wife Emily was soon diagnosed with cancer, and during her terminal illness, he made drawings of their pet cat Peter to cheer her up. A Kitten’s Christmas Party was published in the Christmas issue of Illustrated London News in 1886, bringing him instant fame.

In 1890 he became President of the National Cat Club, doing much to raise the status of cats at a time when they were not highly regarded as pets.

Wain supported his sisters, but ran into financial difficulties, as he was bad at negotiating fees and royalties. His eccentricities turned into more serious mental instability, and in 1924 he was certified insane and removed to a pauper ward at the Middlesex County Mental Asylum.

When he was discovered sketching cats by a hospital guardian, a public fund was launched, which enabled him to move to the Bethlem Royal Hospital in Southwark in 1925, where he enjoyed better conditions. The Prime Minister Ramsay McDonald also arranged a small pension for Wain’s sisters in recognition of his services to popular art.

In 1930, Wain was moved to Napsbury Hospital, where he died in July 1939. In recent years his pictures have become highly collectable. Examples of his work are held at St Albans Museum + Gallery.