Description of the Nurnberg Trials from Greenhouse with Cyclamens I, 1946. 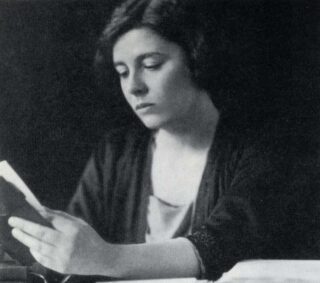 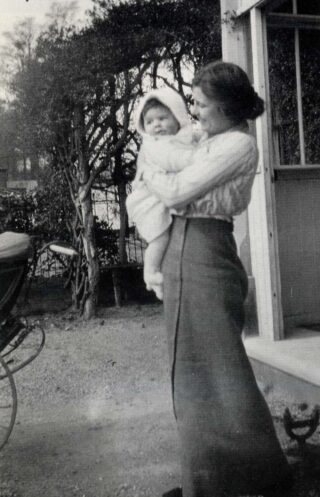 Rebecca West with Anthony at Quinbury
'Rececca West: A Life' by Victoria Glendinning, 1987 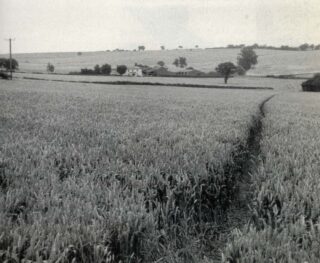 Quinbury Farm in its isolated position across the fields
'Rececca West: A Life' by Victoria Glendinning, 1987

Rebecca West was the pseudonym of Cicely Fairfield (1892-1983), a journalist, novelist and critic, whose works include the novel The Return of the Soldier, and her reports of the Nuremburg Trials, first published in The New Yorker. As a young woman, she had a ten-year relationship with the author H. G. Wells, who rented a farmhouse for her in Braughing, following the birth of their illegitimate child in 1914.

West started to establish a reputation as a journalist from 1911, contributing to the left-wing press and championing women’s suffrage. Wells, who had a history of extra-marital relationships with young women, invited her to lunch, when she published a scathing criticism of his novel Marriage in 1912. They became lovers, frequently corresponding with each other, using the pet names ‘Panther’ and ‘Jaguar.’

When she gave birth to their son Anthony, Wells set her up as ‘Mrs West’ at Quinbury Farm outside Braughing – a suitably remote location not to attract attention. Wells, posing as ‘Mr West’ – a travelling journalist, made frequent visits on his bicycle or by car from his family home in Dunmow.

West was not happy in Braughing, cut off from London society and suffering the hardship of rural life during the war. She was threatened with blackmail, and denounced in the village by her housekeeper, who guessed the truth of her situation, and Wells moved her to Hatch End in 1915.

She remained friends with Wells until his death in 1946, but her relationship with her son broke down. His fictionalised autobiography Heritage, featuring the illegitimate son of two famous writers, portrayed the mother as deceitful and unloving, and she suppressed its publication in England.

West went on to establish an international reputation as a writer. She was made a Dame in 1959, and died in London in 1983.