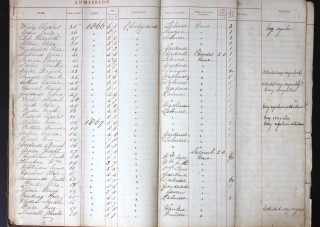 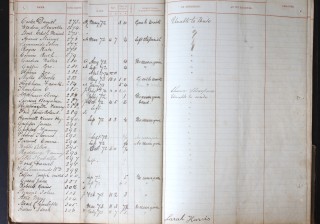 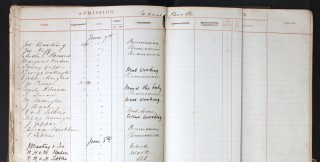 Admission registers record a pupil’s entry to a particular school and are arranged according to the date of admission. The type of information contained within the registers varies and the completeness of the entries often depends on the thoroughness of the individual recording them.

This particular register records information about a child’s admission, his or her parent and the nature of his or her withdrawal from the school. Six-year-old Charles Wosley entered Christ Church School in 1866, the son of a labourer resident in Chorleywood. A regular attendee, he remained in the school for three years until he was withdrawn on 15 November 1869. A note gives the reason: gone to work. Other entries in the register illustrate that this was not an uncommon occurrence. In 1869, education was not universally available and what provision did exist was neither compulsory nor free.

But an act was passed in the following year which transformed elementary education in England and Wales. The 1870 Elementary Education Act provided a framework for schools to be established in areas which previously had none. The Act also represented the state’s first attempt to take responsibility for educating its populace.

The Act made education more widely available than before and was undoubtedly one of the contributing factors to increased literacy in the late nineteenth century. This may be traced in Christ Church’s admission register. Throughout the 1860s, the field for a child to enter his or her signature was usually left blank or the phrase unable to write was entered. However, in the early 1870s, children’s signatures appear for the first time in the register. Eleven-year-old Sarah Harris, a labourer’s daughter, signed her name on her admission in February 1873. More signatures appear later. In a time when a working-class adult’s signature was still a rarity, it is wonderful to encounter a child’s name written in their own hand.

Attendance was still not compulsory and would not become so until the 1880 Elementary Education Act. Children were still being withdrawn from school to go to work or to assist at home as necessary. As such, it would not be expected for children’s absences from school to be recorded in the same way they are today. This is what makes the Christ Church admission register so surprising and unusual. Two pages at the end of the register record the children’s excuses for their absence from school. George Wallington missed school on the afternoon of 7 June (no year given) to go wooding. On the same day, Emily Robinson remained at home to mind the baby.