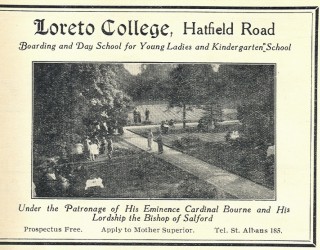 An advert for Loreto in the 1931 St Albans trade directory 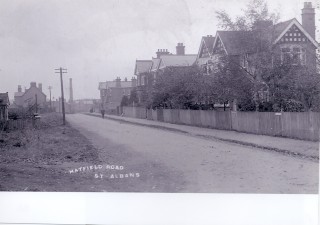 A photograph of Hatfield Road

In January 1922 Loreto College was founded as an all girl’s boarding school with only 7 pupils. Now it’s a comprehensive Roman Catholic school with over 800 girl’s. Terence Newell, a citizen of St Albans in the 1930’s recalls his memories of the teaching at Loreto College “A small but devoted band of nuns laboured hard at transforming the young girls” in “Ten of the best” (1985).

It is situated mainly on Hatfield road, which also home the still standing almshouses built and endowed in about 1736 by Sarah Churchill, the first Duchess of Marlborough. However it also borders Marlborough Gate and Upper lattimore road, which was home to Samuel Ryder, the founder of the Ryder cup.

The school was founded primarily by Mary Ward, a Catholic nun born in 1585, who campaigned for Women’s education. She helped to set up the I.B.V.M: The Institute of Blessed Virgin Mary, which went on to start Loreto College, becoming the first provider of secondary schooling for girls in St Albans.

The original part of the school, known as “the elms” was built in the years before 1922 and was used as the convent, as the school was originally run by nuns and had been untill a few years ago. The nuns however worked hard to expand the school and in 1923 brought a building known as “St Josephs” from Samuel Ryder, a well known English business man and founder of the Ryder cup. This building on Upper Lattimore road had been home to Mr Ryder for many years but became Loreto College’s new languages department shortly after. In the 1930’s the school further expanded with the building of the chapel, library and many new departments; which also became dormitories for the boarding pupils at the school. In December 1941, in the war against Japan, American soldiers billeted in St Albans drilled on the hockey pitch at Loreto College, where an old gymnasium was used as an air raid shelter during day raids and as extra dormitories during the night. However the pitch was repaired and in 2000 a new gymnasium was built, allowing the sports at the school to develop further from just “Netball and Hockey” to over 20 that they now offer. The newest building was built in 2009 and named the Mary Ward building to commemorate Loreto’s founder and is now used as the English department.

Now Loreto College is well known around the world with other schools in England, Ireland, Africa, Asia and even Australia, which all originated from one woman; Mary Ward, of whom we recently celebrated her 400th anniversary.