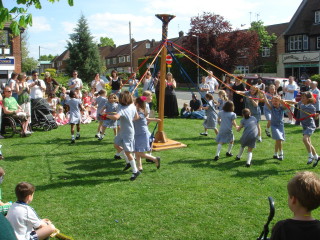 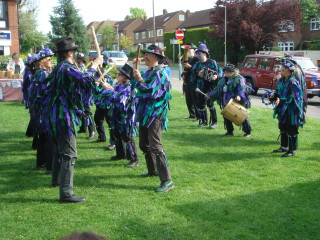 Local residents and visitors came out to a May Day Celebration which took place on the village green in Brookmans on Saturday 2nd May 2009. The event was organised by the Rotary Club of Brookmans Park.

The organisers were grateful for a beautiful early summer afternoon and those attending enjoyed the Tombola, Bric-a-brac and handicraft stalls. The face painters were busy all afternoon creating tigers, princesses, pirates, clowns and faces with football team colours. One of the most popular attractions was the “Village Stocks” where members from the Rotary Club were pelted with wet sponges. Children of all ages took part in the treasure hunt quiz which included questions linked to local shops and restaurants. Hertfordshire police and the local community support officer were in attendance with a mobile police station and a patrol car which was very popular with the children.