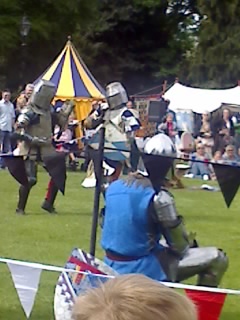 This picture is taken at the Medieval Weekend at Hertford Castle Gardens in May 2009. This shows the re-enactment of a battle between 2 of the knights of the King’s Arthur’s Round Table, wearing full armour.

There was also falconry and archery on the day and in the background of the picture you can see some of the tents on the lawn, which had members of re-enactment societies dressed in period costume and doing various crafts like pottery.