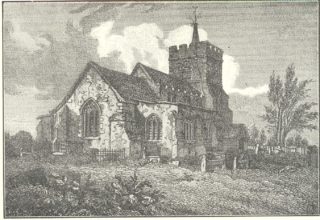 Five songs were collected, mostly by the great collector Lucy Broadwood, from a Mrs Wilson of Kings Langley.  Only one song is dated, to 1892, and it seems unlikely that such a common name could be tracked down.  In fact, there were two Mrs Wilsons living in Kings Langley at the time; but the crucial clue is provided by the fact that all but one of these songs are included in the 2006 collection A Little Book of Northamptonshire Song, where Mrs Wilson is described as being from Kings Langley but “a native of Northamptonshire”.  This is crucial, since Clara Susanna Wilson was born in Kettering, Northants.

Clara was born about 1851, but I’ve been unable to discover her maiden name, so I’ve no information about her background.  In 1876, in her mid twenties, she married Cornelius Wilson, two years her junior, from Abbots Langley, described as a gardener.  The marriage was in Kettering, and it’s possible that Cornelius’s work had taken his up there.

In 1881, the couple were living in Abbots Langley with Cornelius’s mother, and had a three-year-old daughter called Selina.  In most of the records, she’s described as Selina K. Wilson, but in the 1911 census, she’s listed under the name Kate.  Perhaps she was going through a phase.

The family subsequently moved to Kings Langley, and then to Hatfield, where they were living at Woodfield Lodge when Cornelius died in 1914, leaving the sum of £206. 3s. 7d. to his widow.  Clara’s own death is a little more enigmatic.  The two possibilities are a Clara Wilson who died in 1916 in Northampton (perhaps having returned to be near family after her husband’s death), and a Clara S. Wilson who died in 1921 in Hatfield.  This one appears more likely, except that her year of birth is given as 1849.  A discrepancy of this degree isn’t impossible, but it leaves the question open.

Selina seems to have been the couple’s only child, and she died in 1953 in St Albans, apparently never having married.

The songs collected from Mrs Wilson were:

The last was collected by J. A. Fuller Maitland, the remainder by Lucy Broadwood.  Only As I Sat on a Sunny Bank is dated (1892) but it seems likely that the other songs – certainly those collected by Lucy Broadwood – would have dated to about the same time, when Clara was just over forty.

On the whole, these are versions of widely known songs.  Two are Christmas carols; Lord Bateman is a well-known ballad; while The Seeds of Love is best known (though this was a little later) as being the first folk song Cecil Sharp ever collected.  (It’s often said that this incident was what prevented the English tradition from being lost to the ravages of the 20th century – and the singer’s name was John England.)

Nevertheless, Clara Wilson’s versions have added to the scope and depth of English folk song, and she deserves to be remembered for that.