Queen Elizabeth II and her visits to Hertfordshire 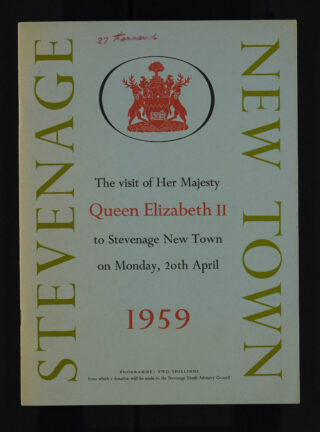 The programme for the visit of Queen Elizabeth II to Stevenage in 1959.
Hertfordshire Archives and Local Studies, CNT/ST/13/1/2. 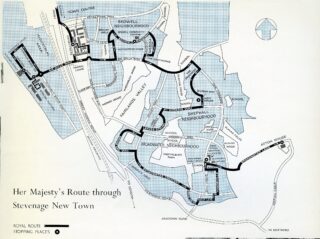 The route the Queen took during her visit to Stevenage, from the programme for the visit of Queen Elizabeth II to Stevenage in 1959.
Hertfordshire Archives and Local Studies, CNT/ST/13/1/2. 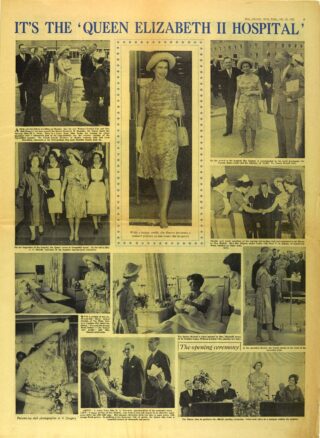 The Queen's visit to the QEII Hospital in 1963.
Welwyn Hatfield Advertiser, Archant, held at Hertfordshire Archives and Local Studies 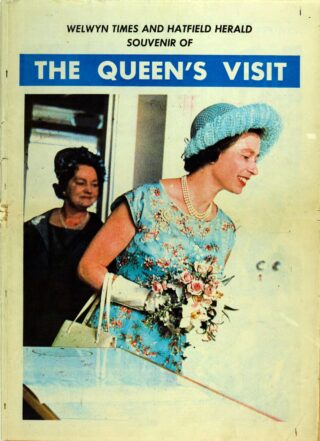 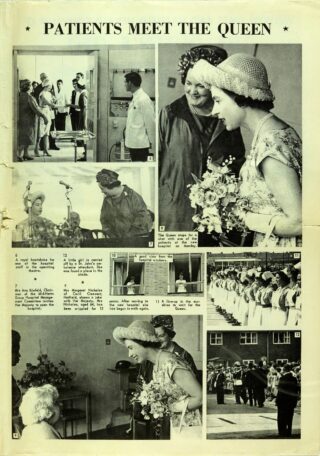 The Queen's visit to the QEII Hospital in 1963.
Welwyn Times and Hatfield Herald, Archant, held at Hertfordshire Archives and Local Studies

Queen Elizabeth II, often known in the county as “Queen of Herts”, has visited Hertfordshire in every decade of her reign.

The Queen’s first official visit to the county after her accession was in July 1952 when she went to Hemel Hempstead to lay the foundation stone of St Barnabas Church. She then visited St Albans Cathedral and drove through Sandridge and Wheathampstead on her way to St Paul’s Walden, the seat of her mother’s family.

She returned several more times in the 1950s, including to Stevenage in April 1959 – the first time a reigning sovereign had visited the town. She unveiled a commemorative panel in the clock tower in the New Town centre and the pedestrian route was named Queensway in her honour. She visited local businesses such as the butchers W H Shepherd, English Electric Aviation Ltd and the Pied Piper pub.

A new hangar at Salisbury Hall in London Colney, where the famous De Haviland Mosquito had been developed, was opened by Queen Elizabeth in 1954. Three years later she returned to St Albans Cathedral where she distributed Royal Maundy money. This was the first time in over two centuries that the Royal Maundy was performed outside of London.

In 1963 the Queen opened the Queen Elizabeth II hospital in Welwyn Garden City. People gathered in the streets to see her, and she met with patients and medical staff. A baby girl born on the day of her visit was named Elizabeth in her honour.

Many other places in Hertfordshire have been opened by the Queen. In 1981 she visited Parmiter’s School in Garston, Watford, to lay its foundation stone, and in 1982 she opened the new Chapter House at St Albans Cathedral and the North Herts Leisure Centre in Letchworth.

As her reign progressed, Queen Elizabeth II continued to visit the county of Hertfordshire in both a royal and personal capacity.

In the summer of 1993, the Queen made numerous important visits to Hertfordshire. In July she visited Harpenden for the 150th anniversary of the Rothamsted Experimental Laboratories and she also went to Letchworth Garden City for the opening of sheltered housing at Tabor Court. The following month she returned to the Queen Elizabeth II Hospital to open a day surgery unit known as the Queen’s Wing. Here she met with staff who had worked there since its opening three decades prior.

Knebworth Park is famous for its music festivals, but in 2003 the Queen and Prince Philip flew in by helicopter and were shown around by Hermione Cobbold, who inherited the house in 1947.

A decade later, during her Diamond Jubilee year of 2012, Queen Elizabeth II toured parts of Hertfordshire in celebration. Hitchin was her first stop, where thousands took to the streets to catch a glimpse. She then continued to Stevenage where she opened a new maternity unit at Lister Hospital. To end her visit she went to Hatfield House where she planted a jubilee tree in the park.

Queen Elizabeth II’s own personal connections to the county arose from her mother’s birth and childhood in St Paul’s Walden. She has often come to visit in an unofficial capacity, meeting her relatives the Bowes-Lyons and friends such as the Cecils of Hatfield House.

Hertfordshire has many happy memories of royal visits from the Queen and other members of the royal family. Do you remember any of them?