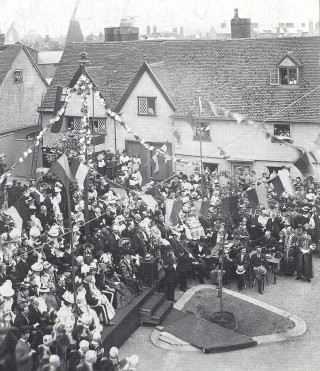 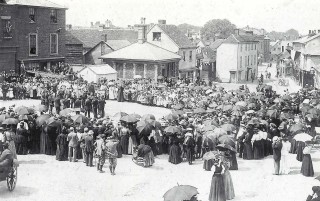 60 years after she was crowned as Queen in 1837, Britain celebrated Queen Victoria’s Diamond Jubilee. 22 June 1897 saw a wave of parties and celebration. However unlike the Golden Jubilee, the Diamond Jubilee was not mere celebration of the anniversary of Victoria’s coronation, but also of the entire British Empire.

Hertfordshire towns fully embraced the festivity of the day, with events taking place all over the county.

The event was enjoyed in the form of food, from a meat supper in Bramfield, to large dinner of over 500 hundred people at Wareside and Westmill boasted of a meal of meat potatoes and hot plum puddings, with some attending the event itself, and invalids having their food delivered to them at home. Patients at the Leavesden Asylum were given fine roast beef and rolled jam pudding. Good will seemed to have spread to employers, as workers were treated to a holiday, and in Therfield and Wyddial food was provided for the workers and the latter also provided meals for the worker’s wives.

Towns and villages across Hertfordshire showed their excitement via the extravagant decoration of buildings and homes. Inhabitants of Barley, Rickmansworth, Watford and Hertford decorated not only their own homes, but the whole town in bunting and British flags, and Stansted Abbotts used banners and even Chinese lanterns.  The variety of decoration ranged from the bold colours of Hemel Hempstead to the sophisticated and tasteful décor of the barn where celebrations were centred in Cottered.

Fireworks were also a source of amusement for the Diamond Jubilee festivities. In thundridge, a crowd gathered at nightfall to watch the town’s fireworks, in a nearby field. Similarly, Sandon planned a fireworks show too, however the non-arrival of the fireworks left them momentarily disappointed. Luckily for Sandon, the evening was saved by dancing and music. Much Hadham also enjoyed dancing and music and lit decorative lamps in the evening.

Some towns such as Chipperfield were able to look back on the day as being so enjoyable due to the pleasantness of the crowds gathering and in ‘the absence of any rough or disorderly behaviour’ and  Widford  carried out the events of the day in a similar fashion, as it was commented by an observer of the event that ‘a better or more orderly crowd could not have been seen anywhere’. Ware and Apsley also celebrated the Jubilee with community events and gatherings and were able to build a friendly and festive atmosphere.

Several more original, one off events were also planned in certain villages and towns in Hertfordshire. In Bushley there was a torchlight procession of art students, people over 60 years of age in Elstree were presented with half a crown and Hatfield hosted a baby show (contestants had all been born in 1897). Activities such as sporting events were organised in places such as Watton-at-Stone, Kelshall and Brent Pelham; in Standon there was even a swimming contest in the River Rib.