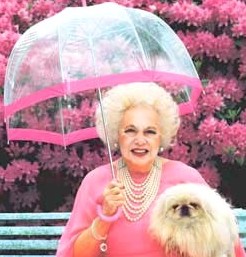 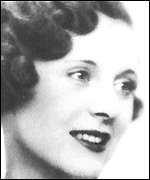 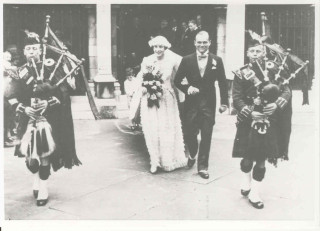 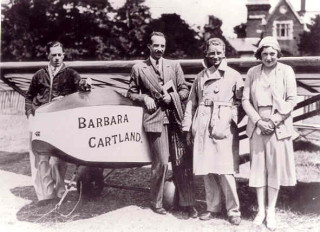 Barbara with her glider 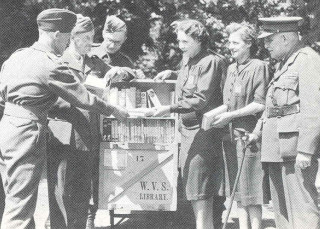 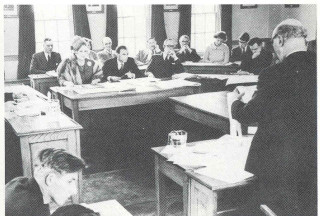 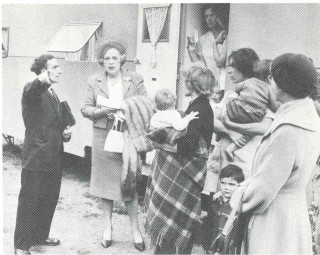 Meeting with Travellers for who she campaigned 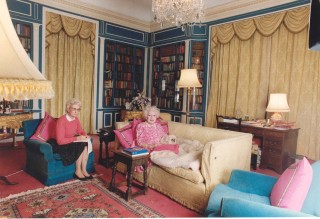 Born in Edgbaston in the West Midlands on 9th July 1901, Barbara Cartland is the third best-selling author of all time, behind only William Shakespeare and Agatha Christie. Known for her flamboyant pink outfits and romantic fiction, there is however a great deal more to her life, coloured with both achievement and tragedy, she campaigned for many different causes, she was a politician, aviation enthusiast and celebrity, who is remembered fondly by the nation for not only her fiction, but for making a difference to many peoples lives.

Her life began into a wealthy family of industrialists, her father was Bertram Cartland the owner of a brass foundry near Birmingham, he had married Mary Hamilton ‘Polly’ Scobell who was from landed gentry background.

The family suffered tragedy when her grandfather James Cartland committed suicide following bankruptcy. This was then followed by her father who was killed on the battlefields of Flanders in May 1918.

Without an income, her mother then provided for them by opening a dress making shop in Kensington, London. At age eighteen Barbara became a gossip columnist for the Daily Express and it is said that this influenced her future writing style, with no paragraph being more than three lines in length.

A young socialite throughout the 1920s and 1930s, she was one of the Bright Young Things and enjoyed the independence and frivolity that typified this young, well off class.

In the 1930s she helped her brother Ronald become elected as a Member of Parliament for King’s Norton, Birmingham in 1935. Only a few years later both her brothers Ronald and Tony were killed at Dunkirk in 1940.

Barabra Cartland also contributed to aviation transportation. Interested in gliding, she suggested that long distance-tows be used for troop transportation. She also suggested that it be used to carry mail and was implemented during the Normandy Landings in 1944. In 1984 she was awarded the Bishop Wright Air Industry Award in recognition of this. During the Second World War she campaigned for the welfare of all those in the RAF and specifically women working in the WAAFS.

Following the War, Barbara Cartland began to develop ‘brand Barbara’, the image that we are familiar with today and embarking on her prolific writing career which lasted into her nineties. Despite old age, she gave interviews and maintained regular correspondence with people and enjoyed lunch at Claridges every Wednesday.

Barbara Cartland died on 21st May, 2000 aged ninety-eight and was buried beneath an oak tree planted by Elizabeth I in her private grounds near Essendon.

In 1950 she moved to Camfield Place in Essendon, the once home of Beatrix Potter’s grandparents and the setting for Peter Rabbit. She would remain here for the rest of her life.

In 1955 she stood for election for Hertfordshire County Council and was successful in her attempts, remaining there for nine years.

During this time she campaigned for controversial causes, most notably better treatment of Travellers. Citing that the constant movement and displacement of these people was detrimental to their children’s education. She donated a three-hundred acre site for them to establish a home which became popularly known as Barbaraville. She also campaigned for the elderly, ensuring that a care home was drastically improved in Hatfield.

At the age of twenty her work began on her first novel, with success following the publication of Jigsaw in 1925.

By the 1970s she was averaging a staggering twenty novels a year. Demand predominantly came from the USA, where readers wanted chaste and romantic fiction. In 2011, she still holds the Guinness World Record for most number of novels written in a year, 1983, with twenty-three novels.

By the year 2000, Barbara Cartland had sold over one billion copies of her works worldwide and had been translated into thirty-five languages. In total she wrote six-hundred and seventy five novels, as well as scripts, verse, books on sociology, autobiography, cookery, philosophy and a record of love songs. Her method for writing stories was not by hand, but instead dictated to a secretary at Camfield Place, completing on average one book a fortnight.

With thanks to the Mill Green Museum service