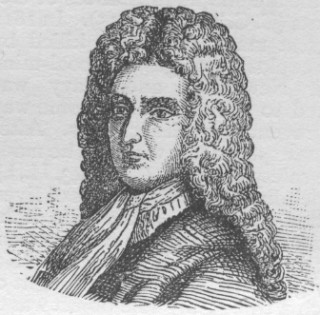 Daniel Defoe (1660?-1731) the popular writer and journalist wrote about Hertfordshire in detail in his non-fiction text, A Tour Thro’ The Whole Island of Great Britain (1724-1727).  Written five years after the enormous success of his novel Robinson Crusoe, the book was published in three volumes. The text serves as an in depth account of Defoe’s visits around the country, and in this respect, was considered among the first of its kind.
Split into letters, Hertfordshire features in part one of the sixth letter:

Two mile from hence, we go up a small ascent by the great road, which for what reason I know not, is there call’d Crab Tree Orchard, when leaving the Street Way on the right, we enter a spacious heath or common call’d Bushy-Heath, where, again, we have a very agreeable prospect.

I cannot but remember, with some satisfaction, that having two foreign gentlemen in my company, in our passing over this heath, I say I could not but then observe, and now remember it with satisfaction, how they were surprized at the beauty of this prospect, and how they look’d at one another, and then again turning their eyes every way in a kind of wonder, one of them said to the other, That England was not like other country’s, but it was all a planted garden.

They had there on the right hand, the town of St. Albans in their view; and all the spaces between, and further beyond it, look’d indeed like a garden. The inclos’d corn-fields made one grand parterre, the thick planted hedge rows, like a wilderness or labyrinth, divided in espaliers; the villages interspers’d, look’d like so many several noble seats of gentlemen at a distance. In a word, it was all nature, and yet look’d all like art; on the left hand we see the west-end of London, Westminster-Abbey, and the Parliament-House, but the body of the city was cut off by the hill, at which Hampstead intercepted the sight on that side.

More to the south we had Hampton Court, and S.W. Windsor, and between both, all those most beautiful parts of Middlesex and Surrey, on the bank of the Thames, of which I have already said so much, and which are indeed the most agreeable in the world.

At the farther end of this heath, is the town of Bushy [Bushey], and at the end of the town, the Earl of Essex has a very good old seat, situate in a pleasant park, at Cashiobery [Cassiobury House was demolished in 1927]; a little farther, is the town of Hemstead [Hemel Hempstead], noted for an extraordinary cornmarket [information of the Hemel Hempstead market can be found here], and at Ashridge, near Hemstead, is an antient mansion house of the Duke of Bridge-water, both these are old built houses, but both shew the greatness of the antient nobility, in the grandeur and majesty of the building, and in the well-planted parks, and high grown woods, with which they are surrounded, than which, there are few finer in England. St. Albans is the capital town, tho’ not the county town of Hertfordshire, it has a great corn market, and is famous for its antient church [St Albans Cathedral], built on the ruins, or part of the ruins of the most famous abbey of Verulam; the greatness of which, is to be judg’d by the old walls, which one sees for a mile before we come to town.

In this church as some workmen were digging for the repairs of the church, they found some steps which led to a door in a very thick stone wall, which being opened, there was discover’d an arched stone vault, and in the middle of it a large coffin near 7 foot long, which being open’d, there was in it the corps of a man, the flesh not consum’d, but discolour’d; by the arms and other paintings on the wall, it appear’d that this must be the body of Humphry Duke of Gloucester, commonly call’d, the good Duke of Gloucester [Gloucester’s tomb was restored in 2000], one of the sons of Henry IV. and brother to King Henry V. and by the most indisputable authority,’ must have lain buried there 277 years. Viz. It being in the 26th of Hen. VI. 1477.

But I must travel no farther this way, till I have taken a journey west from London, and seen what the country affords that way; the next towns adjacent to London, are, Kensington, Chelsea, Hammersmith, Fulham, Twickenham, &. all of them near, or adjoyning to the river of Thames, and which, by the beauty of their buildings, make good the north shore of the river, answerable, to what I have already describ’d. Kensington cannot be nam’d without mentioning the king’s palace there; a building which may now be call’d entirely new, tho’ it was originally an old house of the Earl of Nottingham’s of whom the late King William bought it, and then enlarg’d it as we see; some of the old building still remaining in the center of the house.