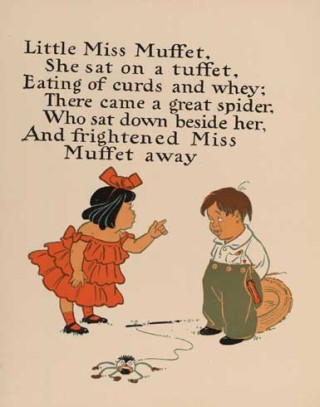 Did you know it is believed the famous nursery rhyme recited for hundreds of years originated in the village of Brookmans Park?  The belief in the local connection emerged from a Dr. Thomas Moffat (1553-1604), famous etymologist who is believed to have written it for his step daughters. The name Moffat has a strong connection with Brookmans Park, including most notably, Moffats Lane, Moffats Farmhouse (which has existed on its present location for centuries) and Moffats House.

Although there is no certain evidence surrounding the connection, it was discovered that the parish recorded the birth of a John Morflett son of Richard Morflett in 1565 (the spelling would not be exact). These were the earliest surviving records for the parish of North Mymms, thus making it plausible that Thomas could have been another child of Richard Morflett. The fact that Thomas Moffat was interested in the natural world and spiders in particular accounts for the inclusion in the rhyme. Although others have argued that the nursery rhyme refers to Mary Queen of Scots and carries a political message, it is certainly fun to believe in the local Hertfordshire connection and serve as a reason to incorporate a spider web into the local school badge.