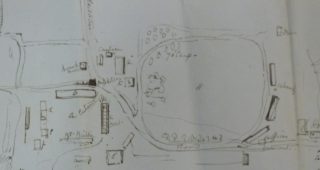 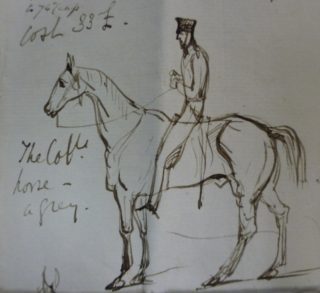 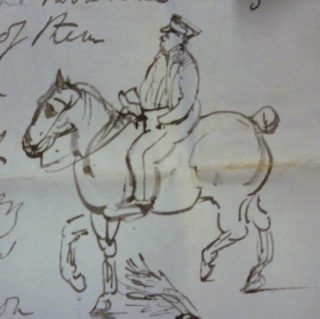 Some of the drawings in the letter to Frederic Blake.

Amongst the estate and family papers held at HALS are those of the Blake family who owned Danesbury during the 19th century.[1]

The house was originally called St. John Lodge.  William Blake took the lease in 1819, purchased the property in 1824 for £23,000 and altered the name to Danesbury.

The papers are not solely concerned with the estate.  For example, William’s second son, Frederic, was in in the 33rd regiment and served in Ireland, Gibralter, Canada, the Crimea and India. The collection includes a letter dated 9 April 1831 describing  regimental life in India which begins with:

“My dear boy I beg to send you an account of the place with illustrations that you will not be taken too much by surprise when you land.” [2]

Frederic was married to Henrietta Marten in 1840.  A letter, dated 6 December 1854, from the Earl of Clarendon, Secretary of State for Foreign Affairs, allowed Mrs Henrietta Blake, travelling with a woman servant, passage to the continent as she was going to join her husband in hospital at Constantinople.[3]

Neighbours were the Bulwer Lyttons at Knebworth and there are some notes on land ownership changes between the two estates.  Correspondence between the families also includes one from Edward Bulwer Lytton on plans for a railway line.  He wrote on 10 April 1845:

“The line proposed by the London & York is the most objectionable to me of any before the Public.”[4]  (The line opened in 1850).

Another source of complaint was an attempt to entice one of his gardeners to move to the Danesbury estate.  Bulwer Lytton wrote to William Blake:

“I am induced to trouble you with this, having learnt that your Gardener has been endeavouring by the offer of higher wages to take from my service a Boy who is employed in my garden and whose wages are quite sufficient for his situation and I am convinced you would never approve of such underhand conduct  …. trusting you will have the goodness to forbid your Gardener interfering for the future with my People for which I shall feel much obliged.”

The sale particulars for May 1824 describe the Danesbury estate as:

“A very Valuable and Capital Freehold Mansion and Farms called St John Lodge, situate near the village of Welwyn“.  The garden was described as having:

William Blake must have taken an interest in gardening and, following the fashion of the time, his gardener, Anthony Parsons, created what the Royal Horticultural Society described as “the best fernery to be found in the Home Counties“.  The fernery was constructed with “artificial” rocks made of pulhamite, a material invented by James Pulham of Broxbourne.

Fashions change and after William Blake’s death in 1875 and that of his gardener in 1880 the garden became neglected.  The house went through many changes of usage during the 20th century .  The grounds were designated a Local Nature Reserve in 1998.  There is, however, a determination to reconstruct the fernery and volunteers have been hard at work.

In September 2015, the Friends of Danesbury Local Nature Reserve started work on the site of the fernery with the onerous task of clearing nettles, elder, thistles, litter and rubble and were rewarded by evidence of pulhamite hidden amongst ivy and tree roots.  Some of their finds are shown on the pdf below.