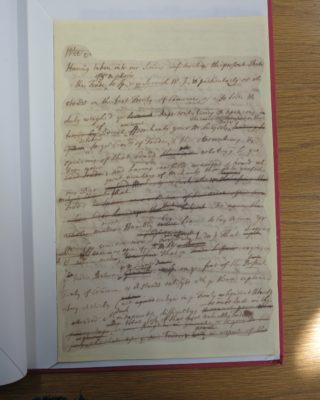 Britain is about to be launched into, and likely to remain in, long and complicated trade negotiations with our European neighbours. It is easy to imagine that such an experience is confined to our own recent history but international trade and the convoluted discussions associated with them are nothing new. A fascinating, if difficult to read, example of the thinking that informs these negotiations is to be found in the Hertfordshire Archives. The first Lord Cowper, a key player in Queen Anne’s government and sometime Lord Chancellor, left note books giving details of his thinking about the treaties which were being drawn up to bring to a close the seemingly endless war with France in 1713. It is clear from the detailed points set down in the book that Lord Cowper took his researches very seriously, with lists of former treaties, dating all through the seventeenth century. The notebook also contains comments on the allies (Holland, Austria and England/Britain) drawing the Spanish Catalans into the war.
“When a debate took place relative to the Catalans, on the 2nd of April, 1714, it was observed by Lord Cowper, … that the Crown of Great Britain having drawn in the Catalans … [he] moved for an address to her Majesty.”

What is possibly even more pertinent and included in the notebook are Earl Cowper’s thoughts on the Treaty of Commerce of 1713. This was a move towards renegotiating Britain’s trade relations with France, who had been, in modern parlance, subject to sanctions from the allies. As one researcher has put it, “the two countries were to enter into a free-trade agreement, abolishing almost all the prohibitive tariffs they had imposed on each other in the course of the two wars.”
This move was profoundly unpopular and caused unrest among the Spanish and Portuguese merchants who had profited by selling their wine in preference to the more popular French wine, as well as woollen goods. On 28 May 1713, the merchants put their case to Parliament with a Merchants Petition. Cowper as a Whig was opposed to the suggested bill, supporting the merchants and in his notes the following draft speech appears:
Having taken into our serious consideration the present state of the trade of your majesty’s subjects to Spain and the Spanish West Indies and particularly as it stands on the last Treaty of Commerce as also seen and duly weighed the representations and opinions of several eminent merchants your majesty’s subjects trade delivered to your Committee of Trade and the observations and opinions of that board relating to the same matter and having carefully examined and heard all our great numbers of merchants thoroughly … that Trade do most humbly beg leave to lay before your majesty (as we consider it our duty to do) that it opines the trade between your subjects and Spain on the foot of the proposed Treaty of Commerce as it stands ratified with the three explanatory articles (not contained in the Treaty signed at Utrecht) as must end in such insuperable difficulties and total loss of that most valuable trade, not to mention objections of loss. … The duties made payable on the import of goods into Spain are much higher than was at any time before this to be paid and the manner and circumstances of paying and much harder for your subjects.
The following actually appears in the reports of the representations to the Queen. It is severely edited but the main points tally with Earl Cowper’s words:
Representation to the Queen, concerning the Difficulties which attend carrying on the Trade according to the Treaty as it stands ratified with the Three explanatory Articles:
“That an humble Representation be presented to Her Majesty, to lay before Her Majesty the insuperable Difficulties which attend the carrying on the Trade between Her Majesty’s Dominions and Spain, on the Foot of the present Treaty of Commerce as it stands ratified, with the Three explanatory Articles; and humbly to pray Her Majesty, to use effectual Means for procuring such Alterations to be made in the same, as may render the said Trade beneficial to this Kingdom

To see how such important speeches are drafted and redrafted presents a fascinating opportunity to get behind the thinking of senior politicians. Earl Cowper’s notebook while fiendishly difficult to decipher is well worth the effort. It shows the workings of a meticulous legal mind, with examples of precedents going back at least 100 years. It also brings the past into line with the present while the current set of politicians and their staff enter into another round of negotiations.