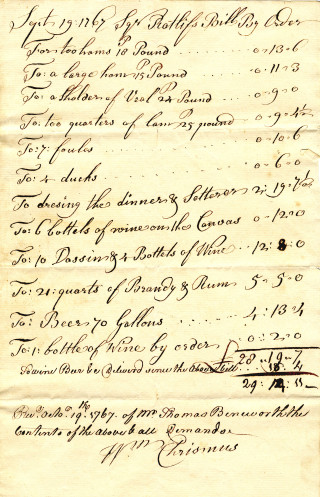 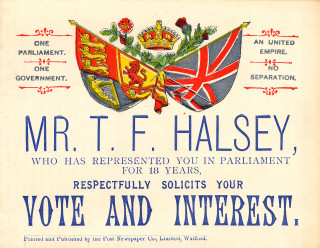 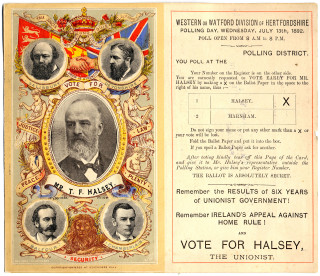 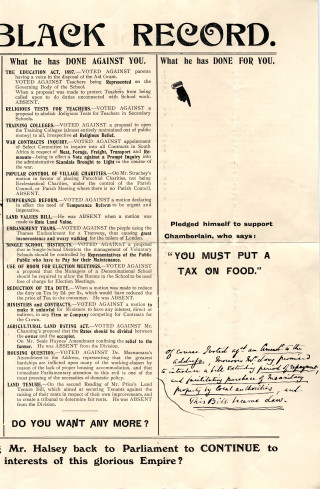 The campaign against Frederick Halsey
Hertfordshire archives and Local Studies 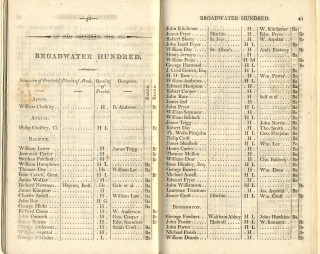 The Parliamentary election campaign of 2010 has seen the advent of live televised debates between the party leaders. In the past, campaigners relied on personal appearances at the hustings and newspaper campaigns.

Today, everybody over 18 is entitled to vote, but the road to universal suffrage has been a long one. The Great Reform Act of 1832 fundamentally changed the way parliamentary votes were distributed and allowed some of the newly industrialised towns of the North to have MP’s for the first time. The proportion of people entitled to vote also rose to 1 in 5, but the minimum property qualification of £10 meant that the vote was not extended to the labouring classes.

However, the great Victorian political reform movement only improved the voting rights of men. Women had to campaign for many more years against the ingrained prejudices of the majority of men in order to gain the right to vote. Finally in 1918, women over 30 and all men over 21 were given the right to vote. It took another 10 years for women to be placed on an  equal footing with men: the Equal Franchise Act of 1928 finally ensured that all men and women over the age of 21 were entitled to vote. The voting age was lowered to 18 in 1969.

Hertfordshire Archives has a number of election posters and other documentation from elections of the past. They show not only the range of electioneering tactics, but also the development of election procedure, from open entertainment of voters and the publication of detailed election results to the secret ballot.

One of the earliets campaigns represented in the records is that of John Radcliffe of Hitchin Priory. He spent £9,000 being elected as MP for St Albans, a seat he held from 1768 until 1783.  The seat was uncontested but he spent lavishly, wooing his voters with meat and drink.  It seems that he did not attend Westminster very often, as no speeches of his are recorded in the House of Commons records.

In 1832, the year of the first Reform Act, local contestants Viscount Grimston for the Conservatives and Sir John Sebright for the Liberals waged an intense newspaper campaign. The Conservatives claimed that Sebright had predicted a resounding liberal victory which he need not trouble to campaign for. In the words of the Conservative poster, Sebright had claimed that ‘he may lie in bed and yet be sure to be returned’. A later conservative poster urged all voters to be sure to vote in favour of the Conservatives; apparently, Sebright’s lack of electioneering activity did not seem to be working against him. However, this was an illusion as Sebright was not returned and Viscount Grimston was elected as the primary MP for Hertfordshire.

In 1852, Thomas Halsey was fighting to be rreturned to Parliament. His appeal for re-election rested on the fact that he had served the county for 18 years. On this occasion he was successful, but on his death two years later, the seat went to the Abel Smith family.However, the Halsey family returned to Parliament when Frederick Halsey was elected in 1874. He campaigned again to be returned as MP for Watford when the Hertfordshire constituency was abolished in 1885. He was fighting for the constituency again in 1892. The campaign was hard fought, with the opposition claiming that Halsey’s previous parliamentary record amounted to little other than support for a very unpopular tax on food. However, Halsey won again for the Conservatives.

Today, all voting is secret, but between 1696 and 1872, Sherrifs were required to keep a Poll book, which showed how all the electors had voted. The books could be commercially valuable and were printed and sold widely. In an age when it was allowable to entertain voters in order to sway their opinions, the information held in the poll books would have been invaluable to election managers.