The Friends Meeting House in Hertford is the oldest surviving purpose-built meeting house in the world and celebrated its 300th anniversary in 2020.  Records of the Quakers who met here can be found at Hertfordshire Archives and Local Studies, and this exhibition shows a few of the examples.

Quakers (the Society of the Friends of Jesus, as they were originally called) moved away from other non-conformist groups to worship in simplicity and silence, to be led by God in the Holy Spirit, and were the only group of Christians who were allowed to follow their own practices in marriage. [Other denominations were required to marry in the Church of England parish church, until 1837.] Consequently their marriage registers are very interesting: all present were expected to be the witnesses and there are often upwards of twenty signatures on the page. 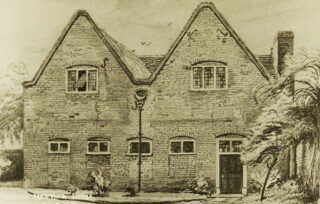 Births, marriages and burials were all recorded, and there are also documents which demonstrate the difficulties endured by those who held Quaker beliefs.

Quakers brought strong principles into public life and were noted for their direct dealing and ethical behaviour. Many of the names on anti-slave trade petitions were Quakers.  By law, Quakers could not go to universities, so they often became prominent in business and commercial life. Banks such as Barclays Bank were founded by Quakers, and in Hertfordshire the Dickinson family in Ware were brewers, bankers and maltsters.