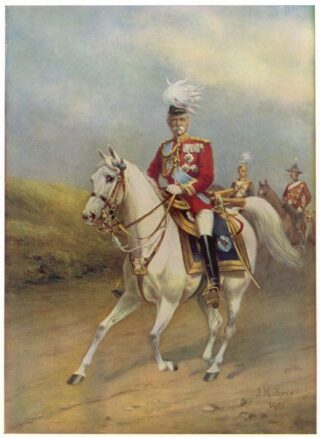 FREDERICK SLEIGH 1st EARL ROBERTS British soldier riding his arab charger, Volonel, which he rode to Kandahar in 1879 during the Afghan conflict

Russia and Great Britain agreed a European truce but there was still distrust between the two Empires.  The British Government was concerned that Russia would over-run Afghanistan and use the country as a base for an attack on India ruled by The Raj.  So Lord Lytton, Britain’s Viceroy in India invaded Afghanistan first, in November, 1878 in what is termed the second Anglo-Afghan War.

Lytton had previously referred to Afghanistan as “an earthen pipkin between two metal pots.”  So after Shīr Ali Khan, the Emir, had allowed General Stolyatov, the Russian envoy, to enter Kabul but had caused Sir Nevil Chamberlain to be turned back at the border, Lytton decided to crush the pipkin. and invaded Afghanistan with mainly Indian troops.

Initially the British forces were successful and a peace treaty was signed in May 1879.  Ya’Kub Khan, Shir’s son, agreed to allow a permanent British Embassy and conduct Afghanistan foreign affairs in accordance and the wishes and advise of the British Government!

In September, 1879, Sir Louis Cavagnari, the British Envoy, and his escort were murdered in Kabul, so British Troops invaded again and occupied the city in October 1879.

When Roberts wrote the letters, mainly from Kabul, Sir John Strachey (5th June 1823 – 19th December 1907) was Finance Minister in the British administration in India, a post he had taken up in 1876 at the request of Lord Lytton, the Viceroy of India at the time.  Clearly the two men were close friends.

In a letter of May, 1880 Roberts laments being superseded by General Stewart and that the political and military duties are being split, ‘ the two duties are so intimately mixed up here that it seems almost impossible to separate them’.  The early departure of Lord Lytton, Viceroy of India, causes a further complication.  Roberts laments his position, he would have liked the Military Secretaryship, ‘if only to have worked out the recommendations of the Army Commission, and to have assisted in some reforms of which the Army is so really in need’.  He thinks things will anyway change as Lord Lytton has gone, with himself being left out in the cold and without prospects when he returns to India.

In July 1880, Roberts writes of his relief that headquarters are not coming to Kabul.  He reports that they are getting on well in Kabul and he was hopeful of a speedy, conclusion to the ‘existing state of affairs’. There was no knowing what might have happened if the threads had been taken up by others. Roberts talks about Jack, presumably Strachey, since he thinks Sir John and his wife ‘may both be quite satisfied that he will do well’, and how he is glad to have Jack with him.

On 7th August, Roberts accepts that the Sepoy troops need to return to India as soon as is practical but he hopes that will not be before matters in Kandahar ‘have been satisfactorily settled – it would be a fresh disappointment to them to leave Kandahar so long as there is any service to be done’.  Roberts is looking forward to returning home ‘but I should be very sorry to leave Afghanistan until Ayub Khan has been and beaten’. He should not ‘be left unpunished after his success at Maiwand’.  This was accomplished in part on 1st September by the British victory over Ayub at Kandahar after Roberts forced march from Kabul.

On 1st October 1880, writing from Quetta (now in Pakistan), Roberts thanks Sir John for his congratulations, presumably on the ‘relief’ of Kandahar.  He is disappointed that Jack (Strachey?) is unable to stay with him but has returned to his regiment which Roberts accepts was the right thing to do.