You are here: Home>Herts history>Topics>South Asian Heritage Month>Lord Lytton's Letter to the People of Cambridge

Lord Lytton's Letter to the People of Cambridge 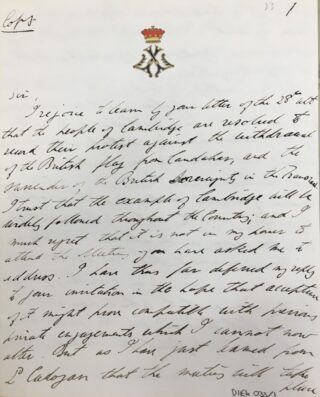 In HALS there is a letter from Lord Lytton in reply to one he had received from someone representing the people of Cambridge presumably complained about the loss of territory in Afghanistan and the granting of Boer independence in the Transvaal in 1881. Although the letter is not dated it is likely to have been written in 1881 after Lytton’s return from India, where he was Viceroy from 1875 to 1880.

Below is a  transcription of the letter.  It has a certain resonance with the recent withdrawal of foreign troops from Afghanistan and epitomises the colonial attitude of the Victorian age.

There is also in the archives a scroll from the Mayor, Aldermen and Burgesses of the Borough of Hertford in Council assembled dated 12th August 1880 welcoming Lord Lytton home from India.

I rejoice to learn by your letter of the 28th inst that the people of Cambridge are resolved to record their protest against the withdrawal of the British flag from Candahar [Qandahār], and the surrender of the British Sovereignty in the Transvaal.

I trust that the example of Cambridge will be widely followed throughout the Country; and I much regret that it is not in my power to attend the matter you have asked me to address. I have thus far deferred my reply to your invitation in the hope that acceptance of it might prove compatible with previous private engagements which I cannot now alter. But as I have just heard from L[ord] Cadogan2 that the meeting will take place at a time when I shall be absent from England, I can only offer you this assurance of my sincere sympathy with the objects of it.

It is I venture to think of the greatest possible national importance that our countrymen at home should clearly understand the nature of the questions now being asked, with increasing anxiety and dismay by our Countrymen in India and the Colonies. Are they to be told that the main threat of British territory,  and the protection of British property (coveted by Boers and Afghans) have less claim on the attention and reason of their Government than the assistance of Greeks and Bulgarians in extorting foreign territory from the state which has never injured Great Britain? For the first time in the history of England, the British flag has been trailed, not metaphorically but actually, in the dust. Have the people of England no objection to this charade in their history? England owes her commercial credit, & much else that is even more valuable than commercial credit, to the belief, inspired in other nations, by the honesty and courage of her people, that an Englishman’s word is as good as his bond. This belief has been destroyed by conduct which deprives our countrymen even of any right to resent the mistrustful contempt with which their word is now regarded by other nations. For other nations have been taught by it that pledges solemnly given to them by our British Government can, as soon as given, be cynically repudiated or falsified by another British Government without compulsion and without shame. Do the people of England wish this result? The people of Transvaal were recently assured by a British General, acting on the authority of a British Government, and in the name of the British Sovereign and people, that rivers should run back to their sources, and the Sun rise in the West, before England would consent to replace them under the rule of Dutch slave owners. The rivers have not run back to their sources. It is a British Government which has turned back from its fulfillment of its word. Those who trusted their freedom to the protection of the British flag have seen that flag publicly insulted with impunity, by those who have defied its authority, and 700,000 of our native fellow subjects in Africa have been handed over “by wish” to what is perhaps the worst because it is.in the most fraudulent, the most indefinite, and the most uncontrollable, form of human slavery, administered by rebels to the only authority which could possibly have mitigated the horrors of it. How are the proceedings viewed by the Countrymen of Wellington?

Less than two years ago, the people of Candahar and the headlands of the Kassam were similarly assured by English officers in England’s name, that England would never suffer the Cabul Power to re-establish its yoke over them. This assurance also has been belied. From the Citadel of Candahar and the headlands of the Kassam, the Carlarons ensign of the Cabul Power now floats above the standard power of the British soldiers, and the forsaken despair of British promises. Is this with the approval of the People of England? It is certainly not in accordance with the sentiments conspicuously expressed by the people of England on a very recent occasion, not many months ago. General Roberts3 on his return to England, received from all parts of the country, the most marked, significant, and merited, demonstrations of the valour attached by all classes of his countrymen to the victories he had won for them. Have they, since then, so changed their minds as to see with satisfaction or indifference the fruit of all those victories discarded? When our soldiers are victorious, are these victories to be condemned and repudiated as crimes? When they are vanquished, are their defeats to be welcomed, without shame, as pretexts of the surrender of all they fought for? These are questions which justify, I think, the meeting you have called to discuss them. They cannot be finally answered by the present House of Commons. They are not Parliamentary but National Questions and they appeal from Festus to Caesar, from the temporary judgement of Parliamentary majorities, to the permanent conscience and growing intelligence of the English Nation.