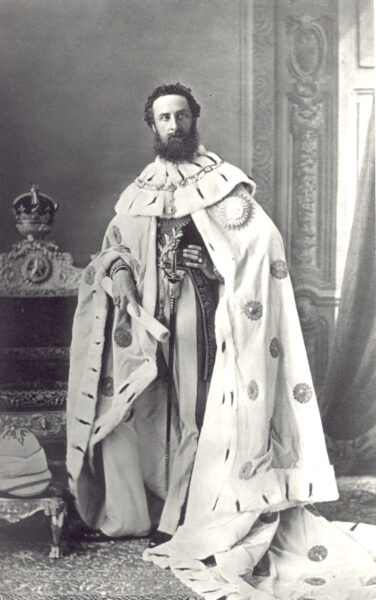 Robert Lytton in his Viceroy robe

Robert Bulwer Lytton, born in 1831, was a British diplomat and poet, son of the well-known author and politician Edward Bulwer Lytton of Knebworth House.

In November 1875 Robert was living with his family in Lisbon as British Ambassador when he was offered the position of Viceroy of India by the British Prime Minister, Benjamin Disraeli, an old friend of his father’s.

Robert was initially reluctant, having planned to retire shortly from politics, settle at Knebworth House and concentrate on his writing and poetry. He also thought that his health would not be strong enough, but eventually he accepted the post and threw himself immediately into learning all he could about India.

The British had taken over government of India from the East India Company in 1858 following a mutiny in 1857. The Viceroy was the Queen’s representative in India. This period of British rule in India is known as The British Raj and lasted until 1947. Some areas of the country remained under the control of Indian Princes, known as ‘The Princely States’, in alliance with the British Government.

Robert and his wife Edith did not want to be parted, so the family relocated to India together in 1876 – Edith, Robert, their three daughters Betty, Constance and Emily and a small staff. The journey took five weeks.

One of Robert’s first tasks as Viceroy was to arrange the Imperial Assemblage or Delhi Durbar, at which Queen Victoria was to be proclaimed Empress of India, on 1 January 1877. The durbar was a ceremonial gathering of the Viceroy, the Indian Princes and rulers, the chief British Officials in India and representatives of foreign governments. It took many months of planning. 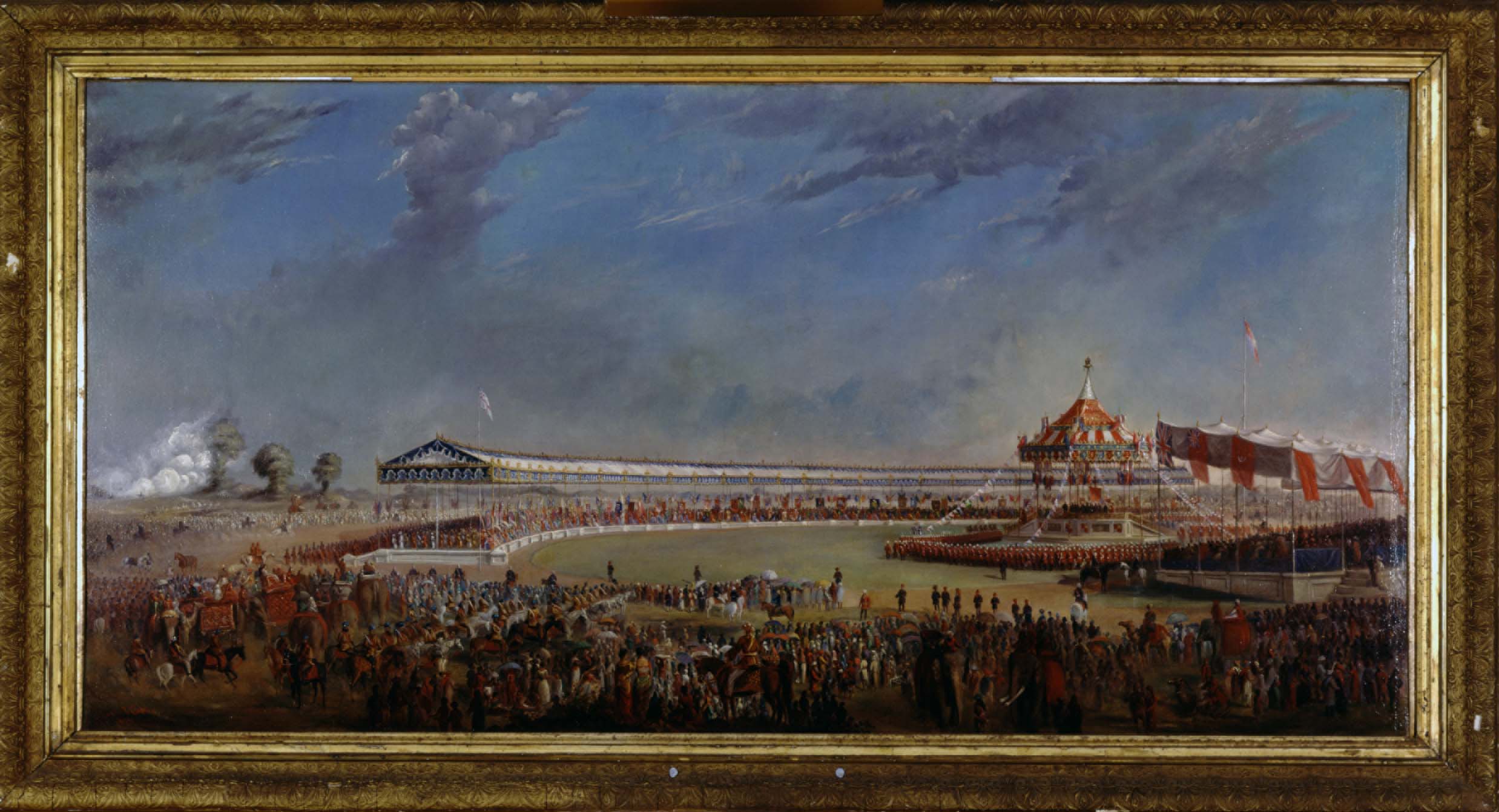 On a site north-west of Delhi, a red and gold hexagonal throne pavilion was constructed for the Viceroy and his party. Facing it, for the Indian Princes, the representatives and officials, was a semi-circular amphitheatre. It took 2000 workers to level the site, there were 15,000 troops and about 100,000 people were camped in the area for the occasion, in addition to hundreds of horses, elephants and camels, in a vast brightly decorated area of camps. 63 Indian Princes attended and were all received by the Viceroy during the celebrations. Queen Victoria herself did not attend. The Indian Princes and Chiefs were presented with large, gold coloured, satin, embroidered heraldic banners, individually decorated with a coat of arms, as a personal gift from Queen Victoria. They were also given a commemorative gold medal with the Queen’s head on it.

After the success of the durbar, Robert settled into life as Viceroy. He was considered slightly unusual for a gentleman politician of his time – he was informal, demonstrative and unconventional. Like Queen Victoria, he had no racial prejudice, inviting Indian guests to receptions and dinners, kissing ladies hands, shocking the Anglo Indian society of the British Raj.

His term as Viceroy was not without controversy. Robert was primarily concerned with India’s relations with Afghanistan. At the time of his appointment, Russian influence was growing in Afghanistan, and the Viceroy had orders from the British government to counteract it or to secure a strong frontier by force, culminating in the Second Anglo Afghan War of 1878–80. Drought, crop failure and exportation lead to widespread famine in India during Robert’s term, and he was faced with its terrible effects, visiting affected areas personally and supervising relief measures.

In 1880, following the British election and a change of government, Robert resigned his post and the family returned to England and settled at Knebworth House. Following his service as Viceroy Robert was given the title Earl of Lytton by Queen Victoria, who had been a great supporter of his.

Edith & Robert’s son, Victor, 2nd Earl of Lytton, who was born in India, became Governor of Bengal from 1922 – 1927 and followed in his parents footsteps by relocating his family to India during his term.