Can a giant bed house a ghost with a giant grudge? 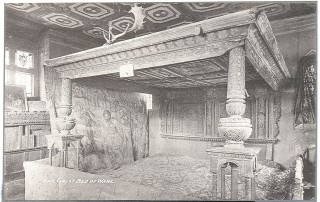 Everybody from Ware (and most of the county, actually) knows of the town’s most infamous historical object: the Great Bed of Ware. However, do they know that this incredible specimen of furniture was long believed to have been haunted?

It was built by a journeyman carpenter from Ware named Jonas Fosbrooke, and presented to the Royal Family in 1463. No-one had ever seen a bed like it before; beautifully and ornately carved, and standing a colossal 12 feet square, this unique four-post behemoth of the bedchamber so impressed and enchanted King Edward IV that he granted Fosbrooke a pension for life. In time, however, over the course of the following century, it became the property of the Lord of Ware Manor, Thomas Fanshawe, and eventually began a tour of the inns of Ware. People would travel many miles to see this awesome beauty, this pinnacle of craftsmanship, and it even passed into folklore – playwrights, poets and authors of the likes of Charles Dickens, Ben Jonson and Lord Byron commemorated it. Even Shakespeare mentioned it, in ‘Twelfth Night’; it was that celebrated.

Yet it came to pass that those who stayed a night in the Bed did not find much rest. They would find themselves being scratched, pinched, and generally beaten about until forced elsewhere. A man named Harrison Saxby, a Master of the Horse to King Henry VIII, endured the Bed alone for a night seeking the love of a local girl. He was found the next morning, covered in bruises and utterly exhausted, lying on the floor beside the Bed. Was it old Jonas haunting the Bed, a poltergeist angry at this debasement of his greatest work by lowly commoners who occupied this Bed he had designed for noble blood?

Ultimately, the Bed’s mottled history was written on it. It had been despoiled, tragically, by its many residents, with various dates and initials carved into its woodwork, ruining the magnificence it once held. Its adventures ended after some time in Rye House in the 1800s, and ended up at last where can be seen today: the Victoria and Albert Museum. The Great Bed’s mystique, though, lives on in its many carvings and sheer leviathanic majesty, and it shall always hold the ability to entrance; whether or not Jonas himself lives on in it, deterring potential common defacers, his legacy certainly does.