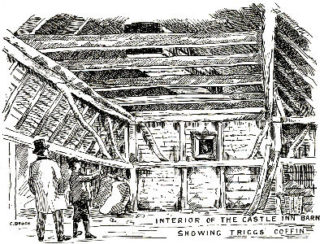 Many people think of Stevenage as being purely a new town, but the area around the High Street has as many old buildings and as much history as most traditional towns. A Grade II listed building, for instance, in Middle Row, Stevenage Old Town, dates from the 17th century and has a rather unusual history. Besides being a fine architectural example of a 17th century timber frame barn, it achieved a degree of fame for a bizarre burial in its roof.

Henry Trigg (c. 1667-1724) was a prosperous grocer whose shop was in Middle Row. He also owned a number of other properties and was a churchwarden and overseer of the parish. The story goes that Trigg once witnessed grave robbers at work and became obsessed that his body shouldn’t suffer the same fate.

Trigg’s will makes very specific provision against this. He specified that his body should be committed for thirty years to “the West end of my Hovel to be decently laid there upon a floor erected by my Executor, upon the purlin for the same purpose, nothing doubting but that at the general Resurrection, I shall receive the same again by the mighty power of God.” Trigg appears to have expected to be restored to life after thirty years, after which he’d resume ownership of his estate.

On his death, the estate was willed (for the time being, presumably) to his brother, the Reverend Thomas Trigg, with the specification that it would pass to another brother George if Thomas were unwilling to carry out the instructions in full. Thomas apparently agreed, and Henry’s body was interred in a lead-lined coffin, with a key inside in anticipation of his return to life.

The coffin was duly hoisted ten feet up to the rafters of the barn behind his shop. This strange burial attracted a considerable amount of tourism, and copies of the will were sold to the curious. The coffin survived not only tourism, but also fires and an alleged theft of hair and tooth by a carpenter repairing it.

The shop became the Old Castle Inn in 1774, and a succession of landlords promoted the coffin as an attraction. During the nineteenth century, the original coffin had deteriorated, so Trigg’s remains (by now just a skeleton) were transferred to a new, iron-bound one and returned to the rafters.

Exactly what happened to Trigg’s remains is a matter of speculation. Commonwealth soldiers billeted in the building during the First World War were alleged to have stolen some of the bones to sell as souvenirs, and there was a later claim that the bones in the coffin were horse bones. When the coffin was removed and restored in 1999, some reports claimed the coffin was empty, while others claimed the undertakers who carried out the restoration had buried what was left.

The shop and barn still stand in Middle Row, but the shop is now empty, having spent many years as a branch of the National Westminster Bank after the Old Castle Inn closed. Henry Trigg is supposed to wander the buildings searching for his remains. He was said to have been seen in 1964 walking through a brick wall, but like many ghosts, he seems shy of showing himself whenever paranormal researchers attempt to record him.

Whatever the fate of Henry Trigg’s bones or spirit, his burial in the roof is a fine tradition for Stevenage Old Town.