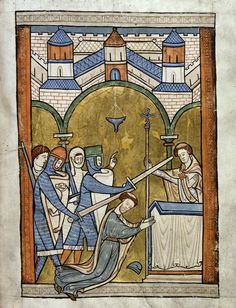 On the night of Christmas Eve 1932, a group of people met at a bridge over Pymms Brook in East Barnet. At midnight, they heard “uncanny sounds” and followed them southwards till they reached Monks Frith, where the sight appeared they’d been hoping for — the spectre of a headless hound. A few minutes later, a knight followed, clad in armour that gleamed silver in the moonlight and a red cloak.

The group hadn’t encountered the hound and the knight by chance. The Red-Cloaked Knight, accompanied by his faithful hound, is said to have walked in southern Hertfordshire and northern Middlesex for centuries, appearing during the same season ever six years. Unusually, though, it’s known precisely who he was — Sir Geoffrey de Mandeville.

While Christ and His Saints Slept

Sir Geoffrey lived at the time of one of England’s bloodiest and most disruptive civil wars, the so-called Anarchy of 1135-1153, during which it was said that Christ and his Saints slept. He was Earl of Essex, and his manors included land at Barnet, South Mimms and Monken Hadley, but he’s best known as a major player in the struggle for the throne between Stephen and Matilda.

He supported both claimants at various times, but in 1143 he was arrested by Stephen and stripped of some of his holdings. In response, Geoffrey raised a rebellion against Stephen, seizing Ramsey Abbey, north of Huntingdon, as his base. He expelled the monks and fortified the place, leading the Pope to excommunicate him, and it was claimed by the chronicler Henry of Huntingdon that, during his occupation of the abbey, “blood exuded from the walls of the church and cloister adjoining, witnessing the divine indignation”.

Geoffrey was still excommunicate when he was killed in battle the following year, so wasn’t eligible for a Christian burial. However, his body was taken by the Knights Templars to their Temple in London, where he was interred in a lead coffin that they hung in the branches of a tree. Eventually, the Prior of Walden Priory (later Abbey) in Essex, which Geoffrey had founded and richly endowed, succeeded in getting the excommunication posthumously reversed, and Geoffrey was given a proper tomb in the Temple.

Although much of Sir Geoffrey’s story has little to do with Hertfordshire, his key power-base centred on the lands around the forest of Enfield Chase, straddling the border of Hertfordshire and Middlesex, and his titles included Sheriff of Hertfordshire. It’s these lands that his spirit has long been said to patrol every six years.

The reasons are unclear, but may be connected with Walden Abbey. Geoffrey is said to have laid a curse when he founded it, that anyone who took away his endowments to the priory would “feel the curse of Almighty God, of St Mary, of blessed James the Apostle and of all the saints in this present life; and that in life to come may he receive everlasting torment with the traitor Judas, unless he repents and makes amends.” Precisely this occurred during Henry VIII’s Dissolution of the Monasteries, and maybe the Earl walks in indignation.

Whatever the reason, Sir Geoffrey’s spirit is next due to walk in 2022. So, if you’re somewhere on his old lands on the night of Christmas Eve that year, you might just get a glimpse of the headless hound and the Red-Cloaked Knight.