The Word is Hertfordshire!

Celebrating 1000 years of Hertfordshire in writing 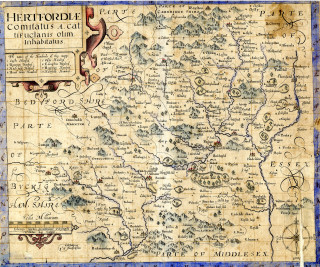 2011 is the 1000th anniversary of the county of Hertfordshire being mentioned in writing for the first time. As the repository of the County’s written memory, Hertfordshire Archives will be leading the way in celebrating the rich and diverse history of Hertfordshire during the last 1000 years. Read on to find out more about our plans for 2011.

In 1011, the Anglo Saxon Chronicle records the invasion of ‘Hertfordshire’ by the rapacious Viking hordes of Sweyn Forkbeard, son of Harald Bluetooth!  This is the first time ‘Hertfordshire’ appears in the written word, and the earliest evidence for its existence. The newly formed ‘shire’ took its name from the fortress town of Hertford, founded by King Alfred’s son, Edward the Elder. Many of the original Anglo-Saxon features, such as the rectangular grid pattern of its streets, survive in Hertford today. ‘Hertfordshire’ was in the frontline in the Anglo-Saxon struggle against the Danes. Local place names, such as ‘Dane End’, are clues to this forgotten past.  The county boundaries, formed out of reconquered Danelaw territory, were set by Edward’s officials, and are little changed today.

Hertfordshire has always been a popular place to live, but as a county of small towns it has struggled to find a collective identity. At its heart is a great story, and celebrating Hertfordshire’s Millennium is an exciting opportunity to raise awareness of how and why it all began, and how it has changed over ten centuries. Rediscovering the significance of its boundaries, local place names, clues in the natural environment, and the sheer thrill of old maps and documents are exciting ways for people to find a new sense of pride in and belonging to the wider community in which they live.

This Week in Hertfordshire’s History

Using the theme of the ‘Chronicle’ to raise questions about how we find out about the past, how and why it is recorded, and how we ‘chronicle’ our lives today, we want to involve children, young people and adults in creative ways of ‘telling the story’, through graphic novels, art, poetry and drama.

Words can be very local, and some Hertfordshire sayings are now difficult to interpret, but gives clues to the past. One resident remembers her mother saying ‘Were you born in Redbourn?’ when she failed to shut the door, and another was threatened with being ‘sent to Hill End’. We want to involve local people in collecting and recording these sayings, and rediscovering the stories they tell. We also want people to find out local Place Names and what they can tell us about the past.

A family learning session, also available for schools, will be developed by the Museums service, taking pupils back 1,000 years to the time of the Saxons. How would they live? What did they wear?  Find out what a word horde is! Activities may include grinding corn, tablet weaving and making a replica cloak pin to take away.

Map Exhibition: The Art of Maps through 1,000 years

We are also seeking funding for a major Exhibition at County Hall to create access to some of the unique and fascinating original maps from the Archive collections, which the public would never otherwise have the opportunity to see. People of all ages will be able to engage with the Exhibition though a programme of talks, workshops and school visits and publications. Maps appeal to everyone, whatever their interest, including art, history, geography, the natural world, and scientific skills and techniques.

Maps enable people to discover the history of their house, the local community to which they belong, and people’s perceptions of the world around them at a particular time.