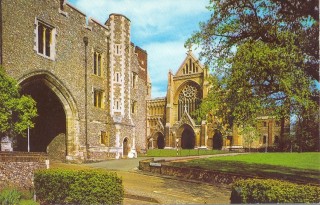 On the 12th August 1877, Queen Victoria granted a second royal charter to St. Albans, (in response of a public petition.) This meant that St. Albans was granted city status to the borough, and Cathedral status to the former Abbey.

Lord Grimthorpe financed a renovation and rebuilding of the cathedral, which cost around £130,000. The new diocese was made mainly from parts of the Diocese of Rochester.

You can see more pictures of the Abbey at St. Albans, before and after the restoration