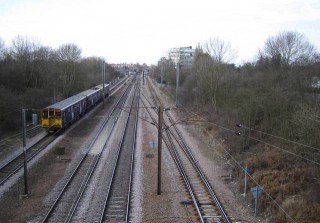 Approaching the site of the rail crash
Nigel Cox

Three trains collided at Potters Bar station on 10 February 1946. Two soldiers were killed and 17 others were injured. Following the enquiry into the accident, the station was rebulit to include four running lines each serving one side of two island platforms. It was intended that this would minimise the risk of similar accidents recurring.

Initially, a suburban train from Hatfield to Kings Cross was derailed after the driver mistook the signals. Following this derailment, the London the Edinburgh express crashed into the derailed carriages. Finally, the Bradford to Kings Cross express was unable to stop in time, even though the driver could see the collision ahead and braked as hard as possible.