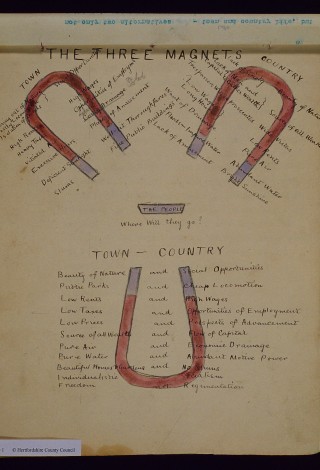 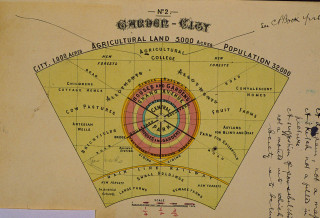 Ebenezer Howard, founder of the Garden City movement was born on 29 January 1850 in Fore Street, London. He attended various schools around the country, including one in Cheshunt and at the age of 15 started a clerical career.

When he was 21, he emigrated to America with two friends, intending to become a farmer. However, the venture did not succeed, so he settled in Chicago and returned to his original career. Whilst there, he was impressed by the remodelling of the town after the great fire of 1871, which provided spacious housing areas within a landscaped urban space.

When Howard returned to England, he went to work for a firm of official parliamentary reporters, where he was responsible for recording details of parliamentary business. He was aware, through this work, of the problems encountered by politicians in dealing with the problems produced by the stream of rural labourers who migrated to the towns to get work. Their absence depressed the rural economy whilst adding to the seemingly insoluble problem of poor living conditions for the urban labouring poor. Charles Booth’s survey of 1888 had shown that a third of the East London population lived in abject poverty.

Other people had been thinking of possible solutions to this problem. George Cadbury built Bourneville and WH Lever built Port Sunlight to house their workers in model towns. The trigger for Howard’s ideas came in the form of a book by Edward Bellamy,  Looking Backward, published in 1888 – a utopian vision of Boston in the year 2000. Howard was so impressed with this that he bought 100 copies to distribute to his friends.

Howard’s own book, ‘Tomorrow, a Peaceful Path to Real Reform’, was published in 1898. the book was later revised and republished as ‘Garden Cities of Tomorrow’. the interest the book generated led to the foundation of the Garden City Association.

Soon after, Howard began buying up land around Letchworth and Welwyn. The building site for what was to become the First Garden City – Letchworth – was declared open on 9 October 1903.