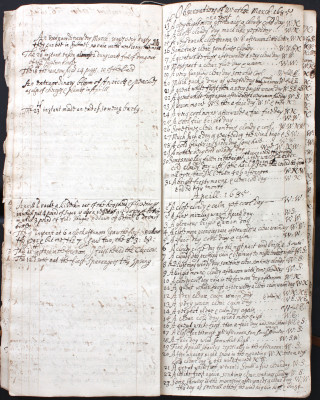 Sir John Wittewronge was the squire of Rothamsted Manor. He had been living there for over forty years and was an elderly man when he began a notebook in which he a kept a daily record of the weather conditions. This diary provides a remarkable insight into weather and its impact on crops, natural history and rural life in the late 17th century. It contains a fascinating range of information, from sowing and harvesting dates for the current crops and vegetables, to the arrival dates of migratory birds from year to year.

Sir John Wittewronge was a direct ancestor of Sir John Lawes, a Victorian scientist who also lived at Rothamsted Manor and who founded the Rothamsted Experimental Station (now the Institute of Arable Crops Research) on the estate in the 19th century.