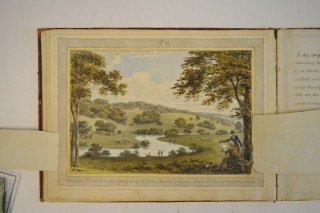 In 1799, Earl Cowper invited Humphry Repton, the leading landscape gardener of his generation, to prepare plans to improve the grounds at Panshanger, near Hertford.  This was his most ambitious scheme in Hertfordshire and over 100 men worked on the project.

Repton widened the river to make a lake and created an impressive park and woodland.  His books were designed with a system of overlays to show ‘before’ and ‘after’ views full of watercolours.  His proposal was to ‘unite the whole of the beautiful valley from Welwyn to Hertford’

The ‘Red Books’ containing his designs are striking, and also survive for Tewin Water and Wall Hall.  In 1788 aged 36, he decided to take up the profession of landscape gardener, a term he coined himself.  In a career spanning 30 years, he received many commissions but by the early 19th century was earning less.  His rich clients were being heavily taxed and couldn’t afford such elaborate changes.

In the 1950s, Nikolaus Pevsner, a leading historian of art and architecture, described Panshanger as ‘one of Repton’s most perfect schemes.’. The house was demolished in 1953 and the land is currently owned by a gravel extraction company.