The Diary of John Carrington, 1800 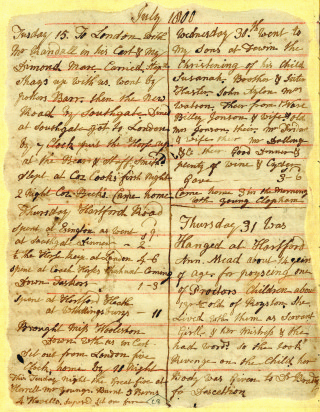 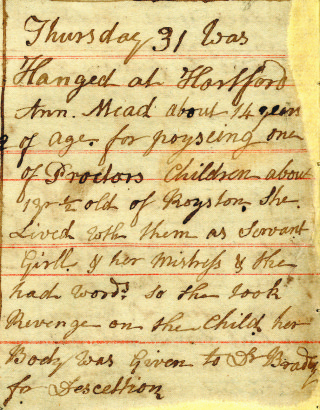 John Carrington (1726-1810), a farmer who lived at Bacon’s Farm, Bramfield, was aged 71 when he began writing his diary after his wife Elizabeth died. Despite his lack of formal education he held several public offices, including that of tax collector and assessor for Bramfield, as well as Chief Constable of several parishes. Written on scraps on paper rather than being leather bound, the diaries are packed full of interest, and give an insight into national events from a local perspective.

In 1800 he describes a Grand Review in Hatfield Park where King George III, the Duke of York, the Prince of Wales, the Queen and Princesses and most of the Royal family were in attendance. Parading on the field to the east of Hatfield House were 1290 volunteers, 55 yeomanry and 300 militia.

One of the many local criminal cases recordedis that of Ann Mead, aged 16, who was found guilty of the Royston murder of Charles Proctor, aged 1, by feeding him a spoonful of arsenic.Carrington’s entry recounts her hanging and subsequent dissection by Dr Brady.