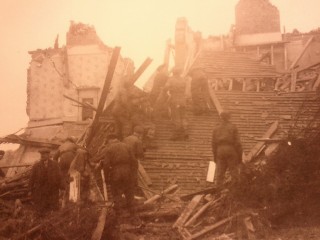 The aftermath of the explosion
Simon Hull

At 3pm on the 8 January 1945 a US Army lorry carrying munitions was involved in a collision with a petrol tanker as it was passing Glebe Farm. The drivers managed to evacuate nearby residents; however a bus from Luton came round the corner just as an explosion occurred, killing three US servicemen on the bus and injuring 21 others. The explosion was so severe that it made a crater on the road 50 feet wide and 14 feet deep. The Windmill and Farm were completely destroyed and Flint cottages were severely damaged, other houses in Offley suffered extensive blast damage.