You are here: Home>Herts history>Topics>Transport>The early days of planes and cars

The early days of planes and cars

We might find it difficult to believe that people living around Luton might get up very early to assemble on Harpenden Common to look at aeroplanes.  In 1913 this is just what they did.

A Harpenden resident, Theodora Wilson, noted that “the world in general is “flying higher”.  Improvements and new “records” are being continually added to the now popular aeroplane – and alas some accidents too.  The deaths not so heavy this year and the Hendon to Edinburgh race was accomplished with only a few mishaps.  The route lay over the common and all Harpenden was up in  the small hours of the morning to see the flight.  I never saw a such a sight – hundreds of people out on the common at 4.00 am – as many as race day – including people from the neighbourhood by motor and by special train“. [i]

Her family were also taking to new modes of transport.  “The locomotive capacity of the family …. has been enhanced lately by Geoffrey’s motor which he set up at Easter time.  I think the ride to Ongar on Boxing night in a hired motor fixed his desires and his colds and other disabilities fixed the necessity for the final purchase.[ii]  He has learned to drive it himself very quickly – I went out with him after less than a week’s trial … We experimented on a new route by Harlow but soon came to conclusion that the old way by Waltham Abbey and Epping was the best and prettiest“.

A more complicated journey was undertaken with Geoffrey’s younger brother, Harold, who took Theodora to a family wedding in August 1913.

” We tried to avoid Watford and turned off the high road to Bricket Wood but lost our way in the intricate lanes … met a baker’s cart.  The man told us if we got down the lane to the lodge gates we could turn back into the high road but all the roads thereabouts were mere by-roads and not fit for motors – an opinion we heartily shared and we were very glad when we reached the lodge gates in safety and got back on the road and we resolved henceforth to stick to the tarred roads. 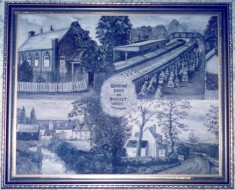 We got through Watford in the midst of a busy Saturday afternoon market and then went on another good tarred road through Bushey.   We had to ask our way several times and were greatly relieved to get sensible directions at last from an AA Scout. 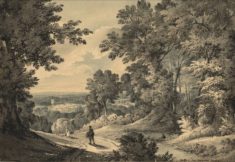 We determined to come back by Stanmore and Elstree where Harold knew the roads much better and we were rewarded by a glorious view on the hill by Elstree church and a delightful run down through Radlett and Park Street to St Albans“.

Theodora concluded the report on the outing with “Harold is getting more accustomed to his machine now“.

A few years later, the novelty of aeroplanes had been replaced by fear.  Theodora wrote in 1917 about the bombing of London, “the alarm was very bad for little people and one hates to see the children suffer from shell shock and nerves.  I had some experience of this when staying at Ongar last year as most raids cross Essex and Kent.  [They] woke the boys and they were really frightened … Geoff and I were watching the shells burst from the landing window when suddenly John came out from his nursery shivering and whimpering that he had heard a horrid noise“.  Although they got him back to sleep he was “a bit jumpy all day“.

She also noted that “a little girl averred that she had seen the German aeroplanes and the English one chasing it but the English one could not catch the German because it went behind the moon!  So much for modern scientific education and the knowledge of distance“.

Theodora’s journals have been published by the Harpenden and District Local History Society.  More information is here.