You are here: Home>Herts history>People>Businesses>Thomas King: Wheelwright and Coachbuilder of Berkhamsted 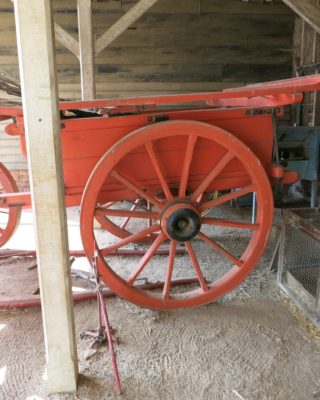 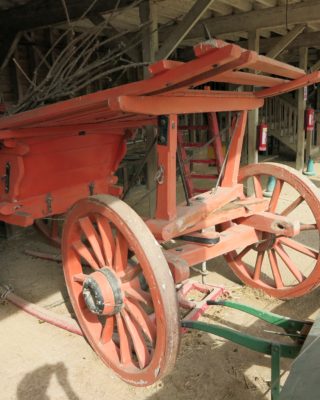 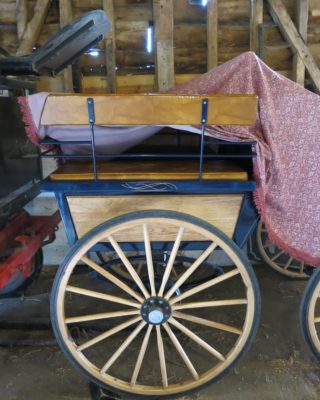 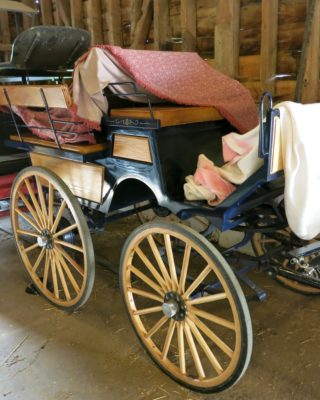 Along with the blacksmith and carpenter, the wheelwright provided an essential service to any community in nineteenth century England. Indeed, the wheelwrights craft has been in existence so long as to have developed in some ways into almost an art form which was governed as much by experience and feel for the work as by measure.

It is fairly certain that the business of Thomas King had been established for some time. One reason for saying this is that he needed to hold quite large stocks of timber: oak for wheel spokes, Ash for the felloes (rim segments) and elm for the hubs. All of which would have had to have been bought well in advance. Thomas would have visited various woods and bought selected trees, probably as standing timber which were then felled, carted home and cut into planks ready to be thoroughly seasoned for several years before the timber would be of any use. The work of converting the timber involved the use of a saw pit, which for the sawyer working in the pit itself would have been hard, dirty and unpleasant work.

The work itself falls into several categories: repairs, new work and miscellaneous items, any of which might be done for a variety of customers. As will be seen, the sheer range of skills that existed in Thomas King’s business is remarkable.

Some work fell outside of what would be thought of as wheelwrights work: the repair of ladders, the supply of beer slides, plough beams and handles, repairs to harrows and repairs to at least one bath chair.

Much of the work was for the repair of vehicles involved in agriculture and forestry. Floors and sides of farm wagons were often breaking and in need of attention. It was the wheels though that suffered the most.  Given the fact that wagons were working on rough ground, new spokes and felloes were often needed. In time the whole wheel might become loose the repair of which involved a process known as cutting and shutting. By Thomas Kings time the wheel was held together by an iron ring which was heated and then cooled to shrink round the circumference to hold the wheel tightly together. This ring had to be shortened (cut), re- welded, heated and fitted again to strengthen the whole. In addition, ironwork also needed attention, for example springs – for a coach or similar –  might need taking apart, cleaning, re-riveting and painting.

Thomas’s work was not just confined to customers in agriculture and forestry. The vicar and the tailor; butcher and brewer; coalman, miller and doctor were only some of the over 24 local tradesmen and businessmen that relied on Thomas King to keep them going. In 1874 Thomas even repaired the omnibus belonging to the Royal Hotel, Tring, which had been in an accident with a thrashing machine. The repair cost the considerable sum of £40 which included new painting in ultramarine blue.

His business though went far beyond local Berkhamsted and covered quite a large area: from Tring and Hemel Hempstead to Chesham and Aylesbury and his reputation spread even as far afield as London where he counted a surgeon in Peckham and a Countess in Kensington among his customers.

As time went on Thomas seems to have become more involved in coach building. Customers often wanted the interiors of their vehicles improved, so as well as the usual repairs to wheels, suspension and bodywork, new floor coverings, upholstery and blinds might be fitted. For example: one phaeton (a sporty open carriage) was lined with claret american cloth and fitted with green lace curtains. It was also sign written, which cost 2 shillings

Prices of course varied greatly. A manure cart might cost ten pounds; a grocer’s van twenty; and a new phaeton for Countess de Salis, which was lined with green Morocco leather and had a coronet painted on the back panel costs one hundred and seven pounds. But by far the most expensive item mentioned in the account books was a one horse landau built for Mrs Pegg of Chesham in August 1874. This was lined with claret cloth and morocco leather and cost £180.

One of the surprising things is how long Thomas had to wait for his money. Many clients seemed to think it quite alright to run yearly accounts and as with any business, the occasional bad debt could arise causing loss and frustration. Sometimes, as a last resort, he had to accept payment in kind. One customer, a publican, was billed three years running for work to a phaeton: in 1845, 1846 and 1847. Thomas writes that he was eventually paid, but not in money and that ‘their conduct was nothing less than an abominable imposition’ – presumably he was at least able to go home and drown his sorrows on the proceeds. On another occasion, after supplying a brand new pony cart costing £16 to a baker in Leighton Buzzard, he had to accept payment in bread and pastry, which really amounted to a dead loss. Although Thomas seems to have been very patient, sometimes he was forced to threaten further action as in the following example when he wrote: ‘Madam, I beg once again to call your attention to your long standing account of £3 0s 6d. It is now between three and four years since the work was done. I hope you won’t compel me to take a step I am very reluctant to take. But as I cannot afford to lose the money – unless I hear from you by Saturday next – I shall certainly do so’. Of course the majority of bills were settled, very often at Hemel Hempstead market where farmers may well have sold cattle and had ready money. On the other hand, others never paid at all – one man, a baker who bought a covered bread barrow costing £7 paid 10s and then emigrated to America leaving the remainder unpaid.

In spite of the difficulties, the business continued to exist in Thomas’s name until at least 1882. It may well have continued well beyond that: there is a mention in Kelly’s directory of Edwin King and Sons, Coachbuilders, High Street, Great Berkhamsted as late as 1929.

Even today the wheelwrights craft is by no means extinct. The Worshipful Company of Wheelwrights lists a great many still working in the British Isles. There are at least two in Williamsburg, Virginia, USA and no doubt wheelwrights can be found in many other countries. There is even one listed in St Helene Island in the South Atlantic Ocean!