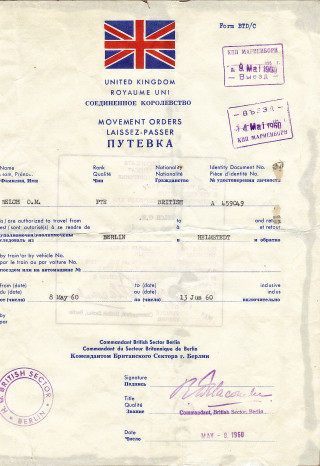 Four of us used to do a Train Guard on the overnight troop train from Berlin to Hannover, returning the following night and we had to have this type of document, in the keeping of the Train O.C., to get through. This is my leave one and should have been handed in at Marionborn, the Check Point. I haven’t got a clue as to how I managed to get hold of it, but it is a prized possesion.

Whilst we were stopped at Marionborn and the Train O.C. was with  the Soviet Officer checking our documents, we were leaning out the opposite side  windows swapping cigarettes for Soviet cap badges with the Guards on that side, usually only two, one each end the train. They would furtively look around, put their hand in pocket, move nearer the train and hand up the badge for a packet of cigarettes.