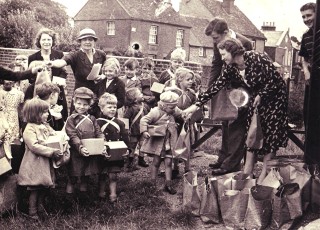 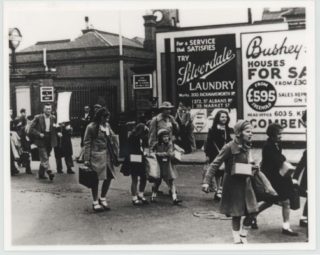 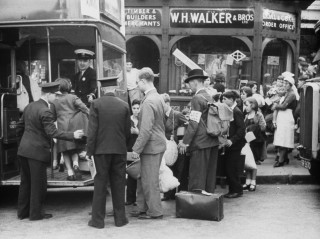 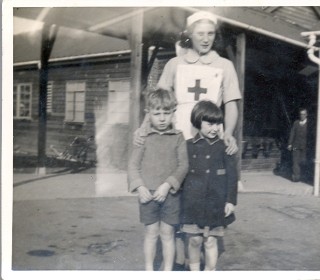 Gwen with some evacuees outside the huts. 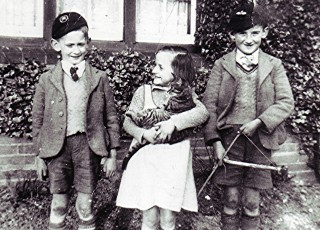 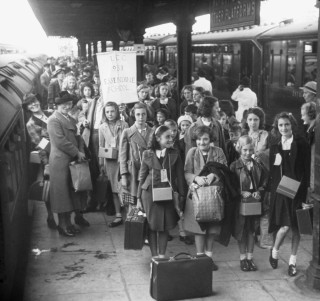 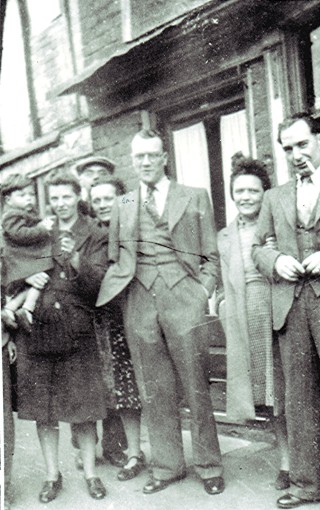 Preparations for war in 1938 included planning a mass evacuation from London, moving schoolchildren, mothers with infants and the elderly to safer locations.  Although Councillor Captain Morris of Sawbridgeworth declared that “In view of the teeming multitude which would leave London directly a bomb dropped, it is useless for small places to make arrangements”  plans had to be made.[i]

Some were already making their own plans.  Mr J F Eccles, General Manager of The Garden City Company [WGC], noted that “it is an ill wind, indeed, that blows no one any good” and the “Munich crisis” of September 1938 had hastened the Danish Bacon Company’s decision to move its head office staff to Welwyn Garden City.  Furthermore, the demand for houses was such that demand for all types of accommodation was hopelessly in excess of supply.[ii]

Hatfield Council recorded receipt of a Circular in January 1939 seeking an audit of potential accommodation for evacuees on the basis of the house having one spare habitable room.  The Chairman recorded that he had met representatives of the Ministry of Health and laid out reasons why Hatfield district was unsuitable as a reception area but Ministry still wanted survey done.[iii]  There was also concern in Berkhamsted with worries about cooking arrangements, hospital capacity, the disruption to household routine,  leaving families with strangers who might not be responsible and the provision of bedding.[iv]  Bedding was a problem.  In Welwyn, a need to purchase blankets was recorded.  240 had been bought locally but the 100 ordered from London not yet arrived[v]

The evacuation order was made on 31 August 1939 and children assembled at their schools on Friday and Saturday – the 1st and 2nd of September.  One memory is of scenes at Hitchin station and although much was well organised “the bus drivers had their orders where to go in sealed envelopes.  Not unnaturally the teachers marshalled the children into buses first and when only teachers were left they got into  the remaining buses without any knowledge as to where the children had been taken and thought they would just be following but found they were put down at Ashwell“.  Having found billets for the children the next challenge was “one Sunday night when several coach loads of expectant mothers from London were literally dumped on the lawn outside the library“.[vi]

It was noted that some evacuees fell on their feet and went to homes such as they had never seen; others were not so lucky.  The hosts also had problems.  In Welwyn, the old cottage hospital was requisitioned to accommodate children with contagious diseases and  at the end of September the Hatfield Emergency Committee recorded a need for hostel accommodation for “Mackintosh” children who needed special supervision or with health problems.  (The Ministry of Health had asked that each child had a case containing their gas mask, a change of under-clothing, night clothes, house shoes or plimsolls, spare stockings or socks, a toothbrush, a comb, a towel, soap and face cloth, handkerchiefs, and, if possible, a warm coat or mackintosh.  This would have made these children conspicuous).  Alexandra House was selected.  This later became a hostel for girls with boys being accommodated at Stevenage.

Not all children were appreciative of the change of scenery.  It was noted (12 October 1939) that two brothers aged 9 and 11 had arrived in Hatfield on the evening of the 9th having walked from their billets in Arlesey (Beds) on their way home to Clapton.  They were billeted overnight in Hatfield.  By February 1940, there were around 800 evacuated children in the Hatfield area – 342 in Hatfield , 278 in North Mymms, 123 in Cuffley and 49 in Newgate Street   45 had returned home.

On 5 September 1939, thanks were recorded in Berkhamsted to the efforts and organisation of the WVS and the ARP with some 1,900 evacuees in the area.  They were also able to note that no further evacuation of the civilian population from London was planned.  By November, the Council were making arrangements for a Christmas entertainment for the evacuated children in the town.[vii]

Although some returned to London, many stayed throughout the war. A report from 1945 on the return home recorded that when the train drew out of the station, there were few dry eyes amongst the children and foster parents, citing in particular a boy who had come to St Leonards nursery in September 1939 at the age of 1 year and 11 months.  He had been billeted in Essendon in 1943 and now, at the age of seven was returning to a home he could not remember.[viii]

There are many stories of evacuees on the hertsmemories website (just search “evacuees”).  Might you be able to add another story?