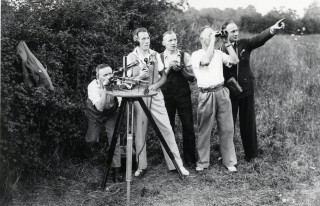 The Observer Corps was mobilised as part of Britain’s anti-aircraft defences on 24th August 1939 and served throughout the Second World War. There were fifteen posts in Hertfordshire, from which details of the type, course, height and speed of enemy aircraft were reported in order to supplement with local detail the ‘plot’ provided by the chain of radar stations.

The Great Offley ‘post’ in the picture are taking part in an exercise in 1937.

For more on the Observer Corps – designated ‘Royal’ in 1941 – in Hertfordshire see ‘Observers’ Tale – the Story of the 17 Group Royal Observer corps’, available in the Local History sections of some libraries in Hertfordshire.