My dear grandchildren, as we celebrate the 75th Anniversary of VE day I thought you might like to share my own memories of that time during my own childhood whe I was only six years old.

Having been born at the end of March 1939, growing up in a wartime situation must have seemed normal. At that time, we lived in Old Southgate in North London. By today’s standards we had a large garden where my parents grew tomatoes, gooseberries, blackcurrants and strawberries.

It must have been one afternoon during the late summer of 1944 that I was sent up the garden with a bowl to pick strawberries for our tea. I had almost filled the bowl when my mother started screaming for me to come in. She had heard a doodlebug (V1) and was frightened it would explode. As I jumped up, I spilt the bowl’s contents, then stopped to retrieve them. Mum’s shouts became even more frantic. By now the doodlebug could no longer be heard, meaning that it was about to drop out of the sky and explode. After a short silence, the world seeming to hold its breath, there came the explosion.

We heard that it had fallen in Avenue Road, about a mile away, and wondered if the A1 Dairy had been hit as our milk came from there. I remember watching out next morning for Audrey, our milk girl, arriving with her horse and milk float as usual. We were so pleased to see that she was unhurt. The milk she brought had a lovely head of cream which would have been poured over the strawberries whilst in season.

There was another reason to watch out for Audrey and that was so that I could go out with a bucket and shovel in case her horse had left any ‘nourishment’ for our tomatoes.

I would have been six when VE Day came, so I had no realisation of what it was all about. A party for local children was arranged in the Walker Hall which belonged to the parish church. I suppose we had various entertainers and a tea party. The photo is a reminder of how we had been starved of entertainment all our lives so to see a conjuror performing his tricks was amazing. 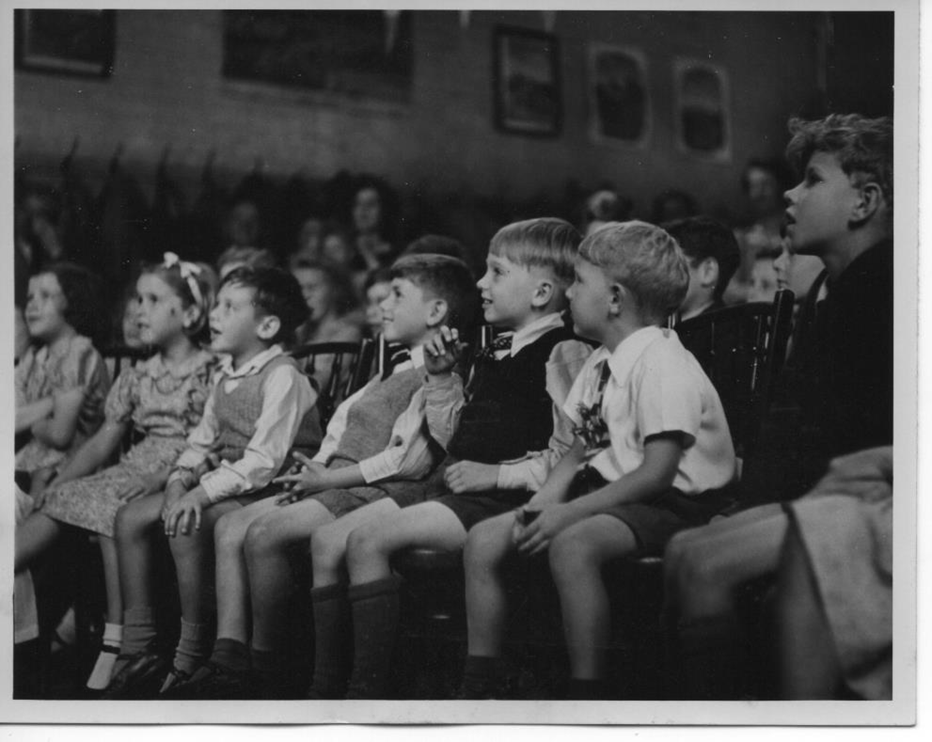 VE Day Party (I am the second boy from the left)

I remember going home with a plastic beaker, a novel material in those days. I clearly recall it was a yellowy-green colour with tulips painted on the outside. In time the tulips faded and eventually disappeared, apparently, they had been painted on by the local ladies using sealing wax dissolved in methylated spirits; I do hope that they were not smokers.

Having this photo has recalled so many memories for me.