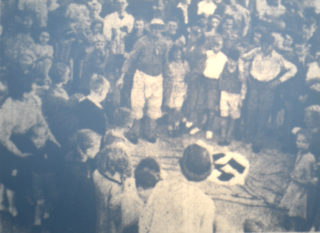 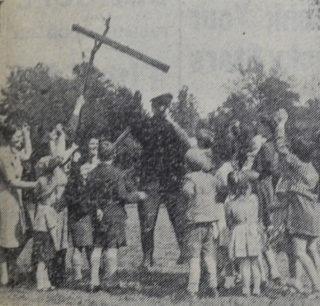 According to the Hertfordshire Mercury, by midnight on Tuesday evening bonfires, were blazing everywhere and the public highway saw blazing heaps of blackout material.  Evidently, some members of the Home Guard had some ‘blanks’ in their locker and they provided the ‘fireworks’. People burned whatever they could find – old furniture, blackout curtains and home made effigies of Hitler were popular.

Burning over the bonfire at Nash Mills was a Nazi flag which had been bought back by Corporal A W Manchester.  Before burning it, the flag had been placed in the road while children trampled on it.  At Hatfield, local factories closed down and this meant a well earned rest for those who had spent long hours making the planes that helped to overcome the Germans.

At Hertford, dozens of fires were lit and many effigies of Hitler were consumed in the flames.  In the village of Tewin, there was a large bonfire on the green surmounted by an effigy of Hitler which delighted the children.  In Welwyn Garden City, residents in Essendon Gardens toured the roads in Peartree with a large effigy of Hitler, 14ft high which they subsequently threw on to a large bonfire.

During the day in Hoddesdon, an effigy of Hitler, complete with swastika armband, iron cross and house painters brush, and a rope around his neck stood in the High Street while two energetic young ladies and a small boy collected for the Red Cross from passers-by, who stopped to look at him.  He was destined for the bonfire that night. Later,  a large crowd gathered around the bonfire, feeding the flames with everything from blackout material to armchairs.