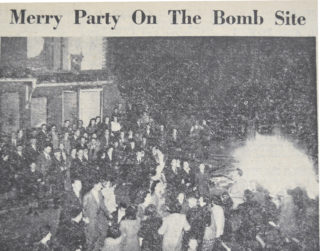 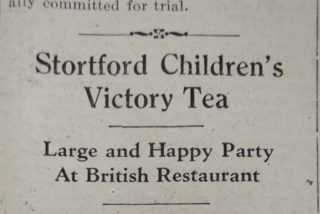 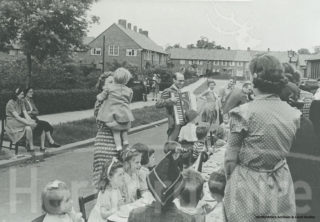 The Second World War was a time of major upheaval for children in Britain with air raids, rationing, changes at school and in their daily life.  For those born at the end of the 1930s, it was normal and they would have known no other way of life.  The excitement on the day would have been overwhelming as street parties and treats were quickly organised.

In Bishops Stortford, one street lamp in the Causeway, back temporarily to pre-war brilliance, was gazed at in wonder by the youngsters, many of whom, of course, had never seen such a night before.

An impressive party took place at Sandringham Road, scene of Watford’s big V bomb incident where among the ruins, the children made merry. *

In Sawbridgeworth, children of the Rhodes estate, numbering about 120, were entertained on the football ground.  After tea, sports were organised for the children, with parents joining in later.  Among the attractions was a football match between married men and women, the male side having their hands tied and not being allowed to run.

At Potters Bar there was an enormous tea for the children, along with an outdoor cinema, a bonfire, firework displays, sports, games and dancing.   At Stanstead Abbotts the children had a tea party and were provided with at least some of the delicacies of which the war has deprived them, and at Chipperfield, to the children’s delight, the Victory Express ran across the common.  This was an electric railway and it did not cease to run for the whole day.

In Ware, tea parties for both children and adults were held in the main streets of the town, games, races and dancing and several streets were floodlit.  Owners of meadows loaned them for sports, fancy dress parades and pony rides.  At the end of the parties, the children received gifts, including oranges, chocolates, ice cream, money, savings stamps and toys.