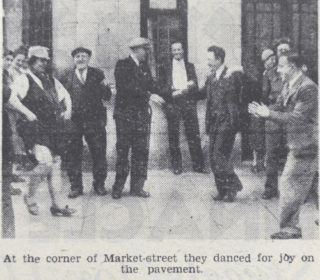 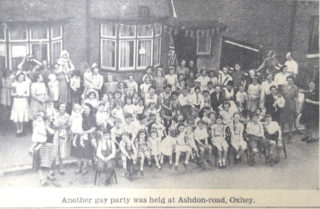 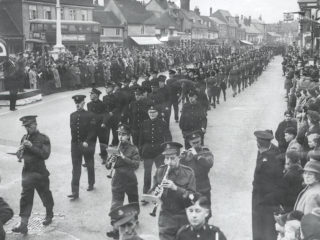 Quickly organised street tea-parties, sports and activities for children were the initial features of celebrations in Hertfordshire.  As festivities continued well into the night, there were bonfires in most towns and villages, along with lots of dancing, drinking and fireworks.

In Hatfield there was not one house without a flag or patriotic flavour.  Apart from the British flags, American and French colours were well displayed.  Many children wore national colours entwined in their hair and most adults wore patriotic emblems pinned to their coats and dresses.

In Braughing, the crowd joined in singing patriotic songs and generally making merry until the small hours of the morning.  At nightfall in Welwyn, a bonfire was lit on the green and there was dancing and singing until after midnight.

Kings Langley was brilliantly decorated and among festivities during the afternoon and evening were a comic football match, races for the children, singing, a bonfire, dancing and fireworks.  The war memorial at Kimpton was flood-lit and adorned with flags.   There were fireworks, a bonfire and a dance at the village hall.

In Stevenage, young people formed a torchlight procession through the town.  The war memorial and a number of public buildings were flood-lit and bonfires were lit at three points.

At Royston, the fun started with the town band giving a concert.  As evening approached, Roystonians came out of their houses to gather together and share good tidings.  The fun carried on until well past midnight with couples dancing around the cross until the small hours.

There were ‘high jinks’ at Ware.  The main jubilations were centred around a large bonfire at the junction of Watton Road and Baldock Street.  It was lit at 10.30 after smaller bonfires in other streets had burnt out.  Several of the more jubilant revellers attired themselves in fancy dress.

At Hemel Hempstead, the pubs were full, and soldiers particularly were celebrating. More than one party, both of soldiers and civilians marched arm-in-arm down Marlowes and numerous other streets in the Borough, singing lustily.

In the days that followed, more victory fetes, parades and fundraisers took place.  However, not everyone was in the mood for celebrating.  Throughout the duration of the War, 258 people were killed by German offensive weapons dropped or landing in Hertfordshire alone.  Many families were still grieving for loved ones they had lost and the war beyond Europe was still being fought by British and Commonwealth forces until Japan surrendered on 15th August 1945.