Hertfordshire reports the end of the War 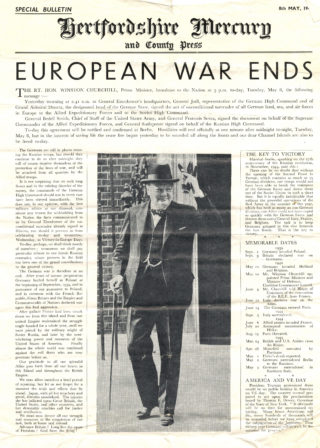 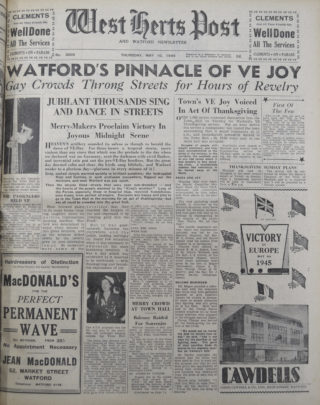 Victory in Europe Day, generally known as VE day, took place on Tuesday, 8 May, 1945 and officially marked the end of the Second World War in Europe.  Hertfordshire’s war weary residents were determined to join in the fun and celebrated with the rest of the country.

‘After a weekend of tense expectancy, it was announced late on Monday that Grand Admiral Doenitz, on behalf of the Third Reich, had ordered the unconditional surrender of all German fighting forces, that the instrument of surrender had been signed, and that the official announcement  of the ending of hostilities in Europe, after five years and eight months of fighting would be made by the Prime Minister, simultaneously with a like announcement in Washington and Moscow, on Tuesday which was officially set apart as VE-day.

Crowds gathered in every decorated town and village in Hertfordshire to hear the broadcast of this historic message and then dispersed to take their part in the day’s celebrations.

The Hertfordshire Mercury said that ‘it was not easy for the mind to grasp the wonderful news – that Germany had collapsed and signed the terms of surrender.  All obstacles of peace had been so suddenly swept away that the news became almost staggering.  People were out to celebrate the event, but not boisterously; they just sauntered along the thoroughfares smiling, relieved that the thought of the burden of war had been lifted from their minds.  From the appearance of the streets on Tuesday morning, the great majority had decided that the time to celebrate had really arrived, although it seemed too good to be true.’

You can discover more about VE Day in Hertfordshire by browsing the other sections of this online exhibition.  You can also find out what’s going on elsewhere online and discover how you can celebrate at home.

We hope you enjoy this exhibition and will share your family memories and stories here too.