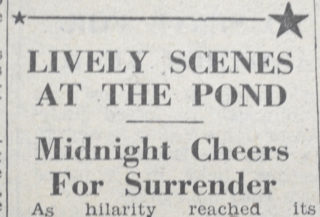 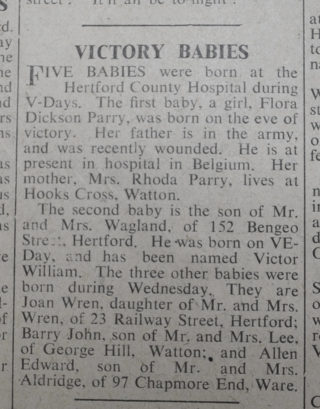 After five years of war, the sense of relief was overwhelming and emotions ran high. The residents of Hertfordshire were definitely ready for a party and unsurprisingly, a few people got carried away, though celebrations were generally good natured.   In one Bengeo street, refreshments were offered to all who were passing and at Tewin the beer was free for anyone who wanted it.

Newspapers reported rowdy scenes at Bovingdon, where members of the US forces, clinging to jeeps, drove around the village firing pistols and bright coloured flares illuminated the streets.  A barrel of beer was ‘borrowed’ from The Bell public house and was later retrieved from behind a tree.  A few people were so excited that they became rowdy and broke glasses in the street.

In Welwyn Garden City, a young British pilot just released from a German prison camp caused a scene in the Cherry Tree ballroom by tearing up up a Nazi swastika flag that was being raffled.  The flag had been bought back by Trooper Ken Mayo of Oaklands who used to work in the Murphy Radio drawing office.

In Little Berkhamsted, several people were injured on VE night when a firework of some description was thrown into a crowd of people where it exploded.  At Watford the high spot of the evening was an impromptu pole-climbing demonstration given by an American.

Large crowds assembled at Verulamium in St Albans, where the broadcast of the King’s speech was relayed.  The National Anthem was sung, followed by a concert.  There were diversions  – jumping crackers, cannons and a smoke bomb let off amid the crowd by the more boisterous youthful element who were eager to get on with the dancing… there were al fresco parties in many streets in the town.

In Hertford, it was reported that a reveller damaged a shop window of an outfitter and several articles from the window were missing.  The fire brigade were called to Maidenhead Street where some decorations had become ignited.   Most people were well behaved and a couple of days later the Mayor of Hertford, Councillor A D Macfarlane congratulated the inhabitants of the town ‘on the way in which they had conducted themselves during the holiday celebration.’  He also complimented the police on their tactfulness’.