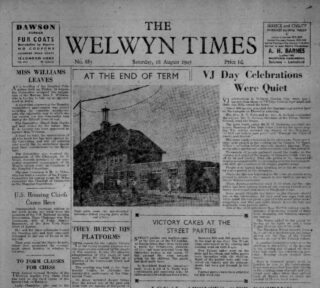 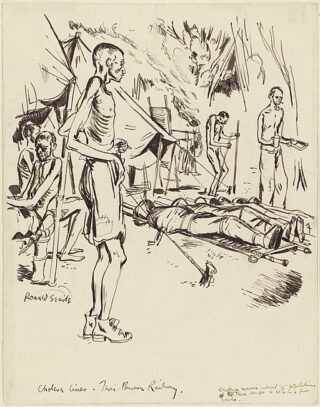 George Saunders joined  the 135th (Herts Yeomanry) Field Artillery  in 1938, just before war broke out. Whilst conflict was brewing in Europe, tensions between China and Japan were also escalating. Full-scale fighting erupted in China in 1937. The United States initially stayed out of the conflicts both in Asia and Europe until the attack on Pearl Harbour on 07 December 1941 in which the Japanese launched a surprise military strike on a variety of US-held naval bases. This attack brought the USA into the world war.

Saunders was captured at Singapore on 15th February 1942 when the city fell into Japanese hands. He and his regiment were transferred to work on the Burma  railway on 22nd October 1942 . The Burma railway was a project to build a 258-mile long railway between Thailand and Burma in order to supply troops and weapons for the Japanese during the war. Whilst Japanese and other Southeast Asian civilians were recruited,  a large number of Prisoners of War also worked on the project.

Japanese  philosophy of the time meant that  anyone who surrendered was held in great contempt. Over 60,000 British and Commonwealth Prisoners of War were sent to work on the Burma railway, often in terrible conditions. Workers were underfed  to the point of malnutrition and starvation, suffered sickness and maltreatment, with harsh punishments for minor infractions, and across the course of construction it is estimated that 16,000 Allied prisoners died.

Anti-Asian racism was present in the United Kingdom at the time. Before the start of the war, the centuries old British Empire was still largely intact. An imperialist outlook often laid a path to a misplaced sense of superiority to other countries and races.  Wartime propaganda (a tool used by all sides), which helped to construct the idea of the enemy, typically played on crude racial stereotypes and was intended to rally support for and justify specific war aims and actions.

George Saunders was held as a Prisoner of War by the Japanese for more than three and a half years. After so much time imprisoned  thousands of miles from home and under horrendous conditions, his joy at returning home is understandable.

To the right are audio recordings of extracts from his diary covering the period from his release from Thailand Camp 4D after more than 3 and half years until his return to England. In the attachment below, you can read the full transcript of his journey. We do not have any further entries from George’s diary after his return on 11 October 1945.

Please note that in the transcript you will encounter some views on race, which are unacceptable today. This is a document of its time and is presented in its entirety so as not to censor or ignore uncomfortable aspects of the county’s history. Hertfordshire County Council in no way condones such views and is committed to supporting equality and diversity within and beyond the organisation.

Every effort has been made to trace copyright holders. Hertfordshire Archives and Local studies welcomes any information that clarifies the copyright ownership of unattributed material.Sources accessed: