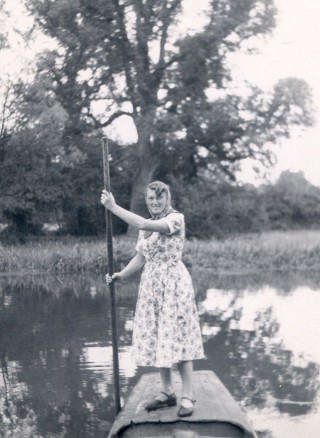 Plan of sleeping arrangement in the air raid shelter

Olive's father in his uniform

To listen to the audio clip, click play on the bar below the photo of Olive on the right

I managed to take Olive into Cambridge on Saturday for the first time, but by jove it was nerve wracking. The streets are so narrow and crowded and the cyclists so incompetent that it was a hell of a job manoeuvring olive as well as myself through the traffic! It was quite thrilling cycling along barricaded roads. Such charming MPs asking for your identify cards. The Tank Corps have been very busy on the railway bridge here, stringing it up with barbed wire and laying dynamite beneath it. If there weren’t a war on it would be most exciting.

We’ve had three air raid alarms in two nights and we’ve had approximately 8 hours sleep. On Thursday we all crammed into the shelter about 12.55, remained there for 2¼ hours. We were all in bed by 3.45 – but oh, the next day! We could hardly move a limb, the lecturers were tire out and extremely bad tempered. Anyway we all hoped that the next night would be better, but no hope. At ll o’clock we were dragged out again, with pillows, rugs etc we settled down as comfortably as possible on the narrow long seats. There were so many of us that we had to lay on top of one another.

Already tired out my yesterday’s lack of sleep, we tried our best to snatch a few winks but it was almost useless. At 11.45 we were again trooping back to bed. No sooner had we begun to fall asleep, than the blasted alarm went again at 1.40. This time we hardly knew how to drag our feet along we were so exhausted. Everyone was marvellously calm, and during the time in there we had chocolate and biscuits passed round. Unfortunately they have not provided any ventilation and the air gets terribly stale and hot. We stayed down there yesterday until 3.20 (a favourite time of Hitler’s). Well, after that, I had a 2 hours Maths exam this morning, and believe it or not, we nearly fell asleep over it. We are quite resigned to the fact that they will be over again tonight.  God knows how long we can go on like this.

I thought Mr Churchill’s speech really wonderful.  If only people would listen to him and believe him instead of that oily voice from Germany.

Mother and I are going over into the park to watch the LDV.  They certainly looked exceedingly smart and very military the other day. They practised ambushing and retreating round and round and viaduct, just like schoolboys and they thoroughly enjoy themselves too, dodging from tree to bush etc. …….. Southgate is, or should be, feeling very proud of its LDV. My, are they smart! And considering how very much older they are than the standing army they are wonderful. Mother and I go over every Thursday and Friday to Arnos Park to watch them ……  they still haven’t rifles or uniforms, but were given armlets last night. I didn’t realise that the LDV were the first line of defense. It doesn’t seem right somehow that the old soldiers should have most of the responsibility once again. But they are a credit to the nation and to the army training of the last war.

Father has got his rifle at last, but it is most frightfully heavy – a USA 1917 model. Actually he says 2 lbs heavier than the ordinary service rifle. Anyway, he has taught me how to use it, the movements etc. and by jove, am I stiff this morning! I was getting on beautifully, lying on the floor with it until Mother start tickling my legs.