Emotions of war and home

A personal account from the front line by Leslie Couzens, 4th-26th November 1944 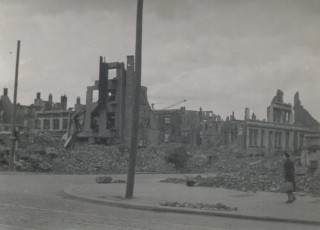 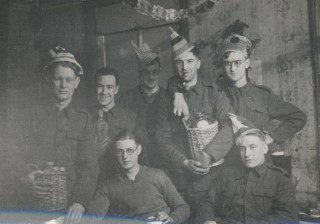 Enjoying a smoke and a drink despite the ravages of war 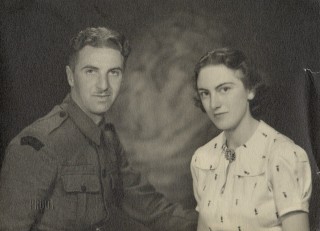 We left our cellar on Thursday and returned to the place we were previously. Imagine our annoyance when we found our reinforced silo had been incorporated into a defence system and we had to dig ourselves a new dugout. We spent from about 2pm until about an hour after dark that day and completed a hole 7’6” and 4’6” deep and roofed it with stout poles 4” thick and about 3’ of earth. Yesterday we completed it by digging a long serpentine trench for an entrance and making pit props to give extra support to the roof. That took us all day so you can see I hardly had time to write. Just as we had completed it we were told that we were moving today! Anyway it’s a move that’s worth while from our point of view so we mustn’t grumble. However it’s about time for we haven’t had our boots or trousers off (apart from baths) for twenty two days!

Thanks awfully for getting some more books for me, which should arrive shortly. Had quite a find when we moved here – someone had left behind this months Esquire (still as luxurious as ever). Someone obviously been doing business with the Yanks. There is quite a trade goes on between us and the Yanks; they will give almost anything for articles of souvenir interest such as Jerry automatics or compasses. Quite a lot of our chaps are sporting Yank windjammer jackets and smoking Yank cigarettes.

Values change with war time and they should do with you as they do with us. To be able to sit back untroubled  for the moment by the enemy and enjoy a cup of tea and a smoke, somewhere out of the rain, is one of the greatest pleasures life can offer. We do not spoil that moment by thinking of what might happen the next week, the next day or even the next hour, or by thinking of what has happened, how so and so who was an awfully decent fellow just got killed or someone else will be a lifetime cripple. It may sound callous but if ones thoughts were always on these things then they would go nuts in no time. I have literally enjoyed a cigarette and cracked jokes with a dead man’s blood still on my hands. You have metaphorically got to be able to do the same thing.

I am also sending you a five Reichmark note as a souvenir. It is particularly interesting as among the countless prisoners I have seen, I have never seen one who faintly resembles the one pictured on the note. We have often remarked that we have yet to see a well built and healthy looking German. Incidentally the note does not mean that I am in Germany! However against that day I would be grateful if you would send my Cassels German dictionary on to me – I find that I have forgotten practically all my German.

When I received your letter telling me that Jane had been born, I felt all that surging of love for you inside me, for what you had suffered and for what you had done so well, and I wished with all my heart that I could have been with you so that I could have kissed you both and said all the things I wanted to say. But like a fool I never wrote and told you. Why? I don’t know unless it was because your letter arrived in the middle of a battle, and when the battle finished a few days later so much had happened to drive those thoughts to the back of my mind and I lapsed into habit again when I wrote. It is almost impossible to write anything of an endearing nature. While I write this, I do so to the accompaniment of the rattle of machine guns, the reports of our artillery, the whine of shells and the occasional bursting of Jerry shells. A minute ago one landed about 50 yards away and a shower of debris fell just outside.  So this letter is really quite a noble effort, and you can understand perhaps why my letters are so scrappy. Someone just snapped a piece of wood and I half jumped out of my skin; any train of thought I had was immediately lost. Any noise for which you can’t instantly account makes your heart miss a beat.

One is less likely to lapse into an unwary attitude after this war if one remembers that the German soldier is a damn good fighter with plenty of guts than if one only thinks of him as a comic opera soldier in an army of old men in horse drawn vehicles as many of our present humorous papers and cartoonists seem to picture him…… It would have been better if before this war we had realised that the German was a damn good soldier and not what he was pictured as a fat, jovial, beer drinking close cropped figure of fun.