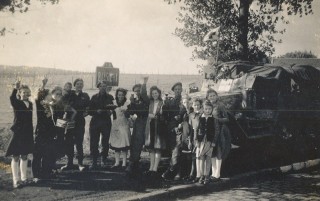 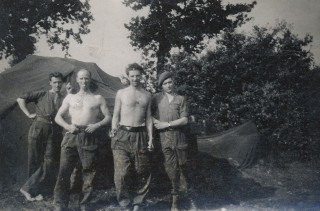 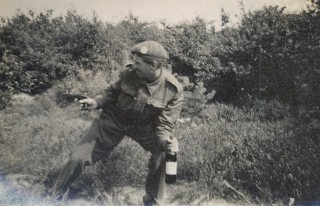 Incidentally, do not be alarmed if you get notification that I am ‘missing’, as we got lost for three days. Actually we were not lost ourselves but we couldn’t find the unit and in the meantime we were posted as missing.

As you will have seen by the papers the weather has not been very kind to us and we have been pretty wet and muddy at times. However, we are a bit better off now and are having a bit of a clean up, getting some washing done and answering our letters. Also we should have a chance for a bit of reading.

The news from all fronts is encouraging (especially the Russian front and the German Home Front) although I suppose that we mustn’t be too optimistic.

I feel a horrible homesickness at times. The country here is not much like England but at times a scene strikes a chord in my memory and I feel that I should be walking along a country lane with you, and I dream of such a country lane with no khaki, no army lorries, no shell craters and no distant reports of gunfire. Some day that dream will come true but it seems a long while coming.

However, things have moved swiftly in the last month and it may not be so long as we thought before I am back with you. I know now what inspired Browning (I think) to write ‘Home Thoughts From Abroad’ and Rupert Brooke to write ‘Grantchester.’ No wonder we fight for England and all it means for us: wild flowers in the hedgerows, the English Sea (even the vulgarity of Brighton Front), the laughter and shouting at the swimming pool, coming out of the pictures into High Street, Anywhere, and seeing the shop fronts lit and the pavements glistening after rain, the autumn mists and leaves, a race against time on the Great North Road, and the expensive futility of the West End. And Home, and you. One day it will come, and I pray it may be soon.

You ask me what are the reactions that go on in my brain. They are too complex to describe, but after a while your brain just goes numb. You see the mangled bodies of your friends – and think nothing… You see bodies that have lain for weeks, run over by tanks, bloated and obscure – and think nothing. Until you are in danger yourself and then you pray. You pray that you might be spared or that you may be hit in the arm or leg and get back to England and out of it for a while. I pray not for myself but that I may be spared for your sake. So far my prayers have been answered and – well I’ve always been lucky. This is war and this is why there must never be another war. This is why when I have written to you I have avoided such topics in order to make my letters a relief of sanity in a world of insanity. Do you mind if I continue to do so?

The Americans are certainly making the spectacular advances, but remember that often the people who do the unspectacular spade work who have the toughest time and deserve the most praise although they usually don’t get it.  I expect the accounts in the newspapers help you to get the correct perspective of the work done by the British and Americans.

Actually, I don’t mind who get the kudos.  I don’t mind if the Americans think they have won this war as well as the last, as long as it is won and won quickly.  At least we have the satisfaction of knowing that England and France were the only two nations who came into the war before they themselves were attacked, to help other countries; and that it was England alone that hung on without any allies when everything looked hopeless.  It was England also, and not America, who took all the bombings, put up with the blackout and rationing, and who is still taking the flying bombs while America is a land of blazing lights, safely and comparatively plenty.  Now the British Army is still ‘taking it’ as much if not more than the American Army and giving it as well.  So whoever gets the praise we’ve nothing on our conscience.

My darling – I have just read in the newspapers that all the beaches are open and are under an entire absence of restrictions.  I suppose now there is no fear of invasion.

So far I have not had a bad birthday.  I have managed to secure for myself quite a few birthday presents including a cigar!  Also we are stocked up again with cognac.  All this on account of a Jerry stores truck which ran slap into the middle of our column this morning.   Also in the way of gifts from the French villages we have liberated today about three dozen eggs and two boxes of Camembert cheese (like stilton – very tasty), two jars of jam and a pot of honey.   Au revoir for now.