A personal account from the front line by Leslie Couzens, 1st September-13th October 1944 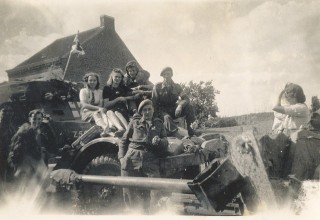 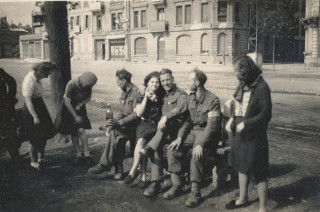 They can't do enough for you 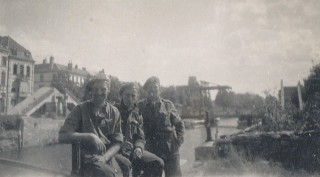 Getting nearer to Germany

This morning in a French village, a man came up to our truck and said ‘get a move on’. Such colloquial English surprised me so I said “You speak good English”, whereat he said “I am English – I come from Croydon and was here in the last war and settled here”. It was really quite funny for he spoke cockney but flavoured with the French accent. Just imagine someone saying ‘Gorblimey Jerry didn’t arf clear out at a hellava lick’ with a French accent.

In almost every town we see we get a tumultuous welcome. In fact it is almost as exhausting as fighting a battle. You almost have to fight your way through the crowds. I can sympathise with R Taylor, Clark Gable etc who are mobbed by women wherever they go. I almost (but not quite) blush to tell you how many women have kissed me, how much vin rouge, byrrh, cognac etc I have pressed on me. Gosh how your father would love to be here. I shall certainly have some news to tell him in my next letter.

p.s. We are drinking ourselves across France and every time a town falls we drink a victory salvo – vin rouge or byrrh for villages and towns under 50,000 inhabitants, cognac over 50,000 and our now rare and precious Calvados for capitals.

At least we Londoners have the satisfaction of having saved our townsmen from the menace of flying bombs. I hope they are as grateful as the people here are. We are almost embarrassed by it. One can hardly pass a person without them stopping to shake your hand and saying ‘Thank you Tommy for our deliverance’ or ‘Thank you for coming, we knew you would’.

You can’t spend a single franc – everything is given to you. If you enter a café, everyone fights for the honour of buying you a drink and invite you to their house so that they can boast to their friends ‘We had a British Tommy here today’. They can’t do enough for you. Also, they don’t like the Yanks. Still I hear they are in Germany now so I suppose they will be in the headlines until Hitler commits suicide.

Well we get nearer and nearer to Germany, in fact according to the wireless today the Americans are in Germany, yet the war doesn’t end. I hope it does soon – I don’t fancy much the idea of fighting inside Germany. Every civilian will be a potential sniper. There seems to be only one way to overcome this and that is to treat German soldiers and civilians alike – drive them ahead of you, kill them or take the prisoner and leave no building that we do not need for our own purposes standing.

Remember that although you miss your home, so do I and as I have a responsibility to you out here in making England and home safe for you, so you have a responsibility to me and to the baby in safeguarding both of yourselves and ensuring that even if our home is blown to bits, I still have a home to come to, for to me you are home even if there isn’t a brick or rafter to shelter us………… Please don’t negate our efforts by needlessly putting yourselves in fresh danger.

The nursery as you describe it certainly sounds attractive. You have put in a lot of work and I only wish I could have given you a hand, if only to lay the linoleum when it arrives. I’m afraid as you say it is rather difficult to work up any terrific excitement about it all out here. Everything at home seems so remote and unreal.  Whether we shall run into any trouble today or the next day, whether we shall get a good night’s sleep tonight, all seem far more real and important than anything that happens at home.  I hope you can understand.